For the hack tool in BioShock, see Automatic Hack Tool.

The Hack Tool is a weapon in BioShock 2 and Minerva's Den. It enables the player to hack Rapture's various vending machines and security devices from a distance. It is the third weapon to be acquired in the game, and is first found in the Atlantic Express. It also appears under the flooded basement of the Boardroom in Minerva's Den, and it is also used by Reed Wahl in the DLC's final level. Like all other weapons, the Hack Tool has a quick-melee attack inflicting a minor amount of damage. In this attack, Delta clenches his hand into a fist and performs a straight punch.

The Hack Tool was an improvised piece of technology created by the clever minds of Rapture. It was more dependable than the effective though somewhat shabby Automatic Hack Tool which was spent after only one use and assembled from discarded parts. The Hack Tool, on the other hand, was purpose-built by technicians and engineers to make their daily work around the city's electronics less difficult. For obvious reasons, such a tool was never meant to be widely or commercially available to the general public, but with the instruction, the necessary parts, and the know-how to put it all together, pretty much anyone could craft a Hack Tool.[1] Inevitably, such instruments got into the wrong hands and malicious hacking became a problem in Rapture.[2] 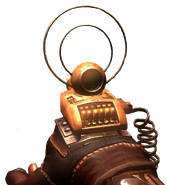 An early concept art of the Hack Tool.