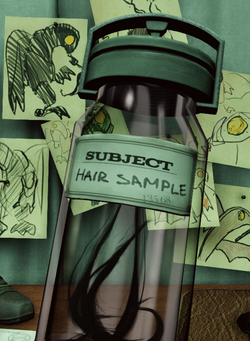 The Hair Sample of Jeremiah Fink's test subject is an item found in Burial at Sea - Episode 2.

Thanks to the Lutece Device, the Columbian scientist Jeremiah Fink and the Rapture geneticist Dr. Yi Suchong managed to collaborate with each other, sharing information from different universes and time periods. They both wanted to get their protectors to imprint on their subjects (The Big Daddies and the Little Sisters and the Songbird and Elizabeth) and while Fink succeeded, Suchong did not. After his breakthrough, Fink felt that there was no point in continuing the arrangement with Suchong and broke off their contact.[1] Suchong, desperate for finding a way for his subjects to imprint, believed the answer would be found in the DNA of a Hair Sample from Fink's subject.[2]

Elizabeth's plan was only to briefly return to Columbia to get a Lutece Particle for Atlas. But as she tries to enter the Tear back to Rapture, Suchong refuses to open it and let her pass through. As there is no way for Suchong to obtain the hair sample himself, he blackmails Elizabeth into finding it for him. In exchange he will allow her to return to the department store. With only minor help from Suchong for the whereabouts of the sample, Elizabeth heads for the abandoned Fink MFG Research Laboratories at the Factory. It is seemingly impossible to find the sample in the vast area, but after some searching she gains access to the Imprinting Studies. Here, Elizabeth sees a projection of herself imprinting on the Songbird, revealing that the actual formula for pairbonding is empathy. Soon after this, she finds the sample among other of her personal effects, which turns out to be her own hair. She heads back to Rapture where she places the sample into a Pneumo Tube, delivering it to Suchong, unaware of the consequences.

Later on, Elizabeth finds the hair sample in Dr. Suchong's Free Clinic, along with his failed tests for the imprinting formula.

The hair sample with the failed results in Suchong's clinic.

A closer look at the documents.