The Paddywhacker, known in-game as the Hand Cannon, is a top-break pistol based on the 1851 Colt Navy percussion cap revolver and can be used by Booker DeWitt in BioShock Infinite and Burial at Sea - Episode 1, and by Elizabeth in Burial at Sea - Episode 2. It is an accurate and rather powerful firearm, strong enough to kill certain enemies with a single shot and even decapitate them entirely.

The revolver is first seen in the Heavy Hitters Part 1: Motorized Patriots trailer when Booker encounters a Motorized Patriot. In the final game, the Hand Cannon can be first acquired when meeting up with Mr. Flambeau at Finkton Proper.

The revolver's cylinder holds six cartridges, and is single action. At most, the revolver can fire up to 75 rounds per minute, however Booker is limited to 24 total rounds, or four cylinders. The player first encounters the Hand Cannon immediately before entering the Plaza of Zeal the first time. From this point on, it is a relatively common weapon, though it is not used regularly by most enemies. Its primary drawbacks are its heavy recoil and slow firing rate; however, these disadvantages are offset by its extreme stopping power, comparable to the Bird's Eye or China Broom. Unlike those weapons, the Hand Cannon remains highly effective in mid-range combat, and is capable of killing most of the non-Heavy Hitters in one headshot, including in Hard mode. When taking on Heavy Hitters such as the Handyman, with the Hand Cannon's slow rate of fire, it is recommended to use Vigors that stun the opponent. Murder of Crows, Shock Jockey, or Undertow, allow the player to line up critical shots with minimal risk of retaliation. When using this gun with the Shock Jockey Vigor, you can have a clear headshot while the enemy is stunned, making it a great combination.

In Episode 1 of Burial at Sea, Booker starts out in Fontaine's Department Store with a Rapture Hand Cannon with only three bullets in the cylinder.

Elizabeth's first opportunity to get the Hand Cannon is by knocking out a female Splicer in Ryan the Lion Preparatory Academy's cafeteria, who wields the gun. If not from her, the player can find another Hand Cannon on a desk in the Faculty Area area of the same Academy. However, the Hand Cannon will not be available for the player if one plays on 1998 Mode. The reload animation for the Hand Cannon looks different and is a bit slower due to Elizabeth's inexperience with weapons.

Concept art for a Hand Cannon.

Hand Cannon in Burial at Sea. 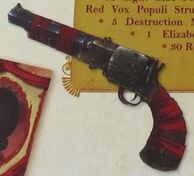 Unused Vox Hand Cannon art from The Siege of Columbia board game. 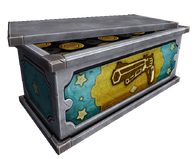 A Founder soldier about to fire her Hand Cannon.