BioShock Wiki
Register
Don't have an account?
Sign In
Advertisement
in: Quotes without a source, Spoilers, Vehicles, BioShock Infinite Locations

For the trophy/achievement in Clash in the Clouds, see Hand of the Prophet (Achievement/Trophy).

The Hand of the Prophet is a massive airship, serving as the flagship of the Columbian zeppelin fleet and Zachary Hale Comstock's personal warship. It appears at the end of BioShock Infinite, serving as the setting for the penultimate level of the game.

The Hand of the Prophet is divided into three main decks, plus a surface deck and a bridge. The first deck is the Hangar Deck, primarily used to accommodate the ship's crew and the multiple gunships that can dock on the vessel to transport cargo and personnel. This level has three open ports for these gunships, connected by wooden catwalks and defended by four Gun Automatons. At the front of this level is the pod launch bay, where the controls to launch Motorized Patriot pods can be found. The galley, barracks, armory, and supply stores are also found on this deck in the maintenance facilities on both port and starboard sides.

The second and largest deck is the Crew Deck and houses several workshops, where Motorized Patriots are built and housed in pods to be launched in battle; they are fed down to the lower decks through trapdoors leading to the Sky-Lines that cover the outside of the vessel. Another pod-launching bay can be found at the front of the deck, and the lower halves of the flagship's wings can be accessed on the sides.

The third deck is the Engineering Deck, an entirely interior deck that is accessed by doors near the wings on each side of the level. This area is mainly occupied by machinery, the main room containing a Sky-Line and a central machine encased in a transparent container. The smaller room is guarded by two Rocket Automatons, and leads to the exterior of the ship, where a Sky-Line to the bridge can be found.

The Bridge overlooks the surface deck, accessed from the back of the level. The entrance consists of a small room dominated by a miniature of Monument Tower cut-away to reveal the massive Siphon within it and Elizabeth's residence at the top. This room also has Comstock's predictions imprinted into the walls around the statue, as the events of the game are clearly shown in six parts, beginning with the damaging of the tower, and ending with the very next scene in the game. This room leads into a ceremonial sanctuary, with a stained glass picture of Elizabeth as Comstock's successor, artificial waterfalls, and a baptismal font in the middle. The catwalks around the top of the room lead to Comstock's quarters (including a chalkboard showing a timeline with forking paths) and the central bridge overlooking the surface deck, from which the ship is steered. The Latin phrase "Audemus Patria Nostra Defendere" (literal translation: "We Dare Defend Our Country") is seen in the steering room.

The surface deck holds an exposed generator that powers the ship, surrounded by Sky-Lines and raised bridges. These Sky-Lines lead to the top of the bridge, which serves as a sniper nest. A large image of the personified Columbia is imprinted into the deck.

Booker DeWitt and Elizabeth access the flagship using a gunship atop Comstock House, which is preprogrammed to dock in the lower level of the ship. Fighting off both Founder and Vox Populi gunships on the way, they eventually reach the ship, only to find it heavily defended by the last remnants of the Founder forces and besieged by the Vox Populi. Fighting both factions, they ascend through the ship by clearing Sky-Lines carrying Motorized Patriot pods on each level, eventually reaching the bridge. Here, they realize that Monument Island is the huge Siphon that is preventing Elizabeth from actively creating Tears. Moving through to the sanctuary, they find Comstock waiting for them, who suggests that Booker knows more about Elizabeth, and her missing finger, than he is telling. After Comstock becomes aggressive with Elizabeth, Booker kills him in a fit of rage.

After Elizabeth becomes concerned about Comstock's words, she and Booker resolve to fly the ship to Monument Island to destroy the Siphon and learn the truth. Steering the ship toward the island, they are besieged by Vox Populi forces, who seek to destroy the Hand of the Prophet and kill Elizabeth. At that moment, Elizabeth works out the meaning of a letter given by her older self, tearing the Whistler from a statute's head and using it to control Songbird. The Vox Populi begin an assault on the flagship's main generator, and Songbird helps defend the surface deck from multiple Vox zeppelins and gunships.

The massive airship in profile.

The underside of the Hand of the Prophet.

A poster regarding Comstock's desires. 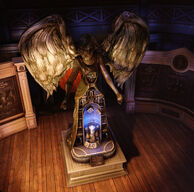 A replica of the Monument Tower in the Hand of the Prophet.

The prophecies set in stone.

The prophet's visions of what's to come.

Comstock's final attempt at turning Elizabeth to his side.

An overhead view of the command deck.

The main surface deck of the Hand of the Prophet.

The Sky-Lines above the Hand of the Prophet's main deck.

The final battle on board the zeppelin.

Elizabeth at the bow after the battle.

A painted version of the stained glass window in the sanctuary.

The angel painted on the main bridge deck.