For the Gene Tonic from BioShock 2, see Handyman (Gene Tonic).

The Handyman is a half-man, half-machine Heavy Hitter enemy type created in Columbia that appears in BioShock Infinite as one of the recurring foes Booker DeWitt faces on his journey.

“Come on down and see the amazing Handyman! Is he man? Is he machine? Only Columbian ingenuity could create such an amazing marvel!”
― Handyman Barker[src]

The Handyman's mechanized form was made by Fink Manufacturing's subsidiary Bettermen's Autobodies to help disabled, sickly, or severely injured citizens of Columbia to not only be able-bodied, but to regain their vitality and technically "live forever". However, the procedure came at the price of having to live with a large and highly disproportionate body and often many unintended side effects. At the Columbian Annual Raffle and Fair, a Handyman is on display and appears fearful and distressed by the gawking crowd. Combat quotes from Handymen suggest that some live in great pain and cannot sleep, showing that the Autobody doesn't work as effectively as advertised, or even that they were forced into the Autobody against their will. The sadness of living while encased in a machine as well as the intense physical pain that is experienced by many due to this process often leads to outbreaks of psychotic rage, during which they are inconsolable and will harm anything and everything that represents a threat to them.

Like the Big Daddies of Rapture, the Handyman is a human artificially bonded to a large mechanical suit turning them into a crude type of cyborg. Most Handymen are dressed in a badly torn blue-gray suit with the exception of those loyal to the Vox Populi, who instead wear a simple pair of tan trousers and pieces of red cloth covering their torso and head. All Handymen have a gorilla-like posture and build, often using their arms to propel themselves in a manner similar to apes. They also have exposed human body parts, particularly their head and heart, the latter of which is kept in a fluid-filled glass tank on their chests attached to several hoses. Thick bundles of cables run from their shoulders to a pair of conductors on their backs, which allow the Handyman to utilize electricity as a weapon (upon defeating a Handyman, the conductors will overload and send a harmless blast of electricity around the area). Their mechanical hands appear to be made of porcelain, and their feet are like hob-nailed boots, with some bent nails hanging out. Each Handyman's torso bears the label "AUTOBODY".

The Handymen possess great strength and speed and are capable of leaping great distances. In addition to their incredible physical attributes, they are completely free-willed, unlike the Big Daddies of Rapture. This makes them even more dangerous because they will not simply attack the player until the player is killed: they seek cover, exploit the environment around them to flank the player (and other enemies), and even grab and throw other enemies at the player if they are out of reach, but within their throwing range. They can close the distance between themselves and their target in fast charges. Moreover, they have the capacity to conduct electricity from their suits, including the ability to hurl balls of lightning as well as electrify Sky-Line rails with their hands. However, while in combat, they frequently pause in order to cough or to compose themselves before attacking again.

Tips for fighting the Handyman (especially on Hard and 1999 Mode):

Yi Suchong saw the Handymen through a Tear and one can be seen in a television monitor along with the photo of another in the Silver Fin Restaurant in Rapture.

On her way to find the hair sample in Columbia that Suchong needs, Elizabeth passes through the Surgical Suite and finds a dead, incomplete Handyman, which was left abandoned when the Vox Populi arrived.

When Elizabeth returns to the Factory Docks after finding the sample, she will find the corpse of the same Vox-aligned Handyman that she and Booker DeWitt fought in BioShock Infinite, outside the door to Fink's Office.

The only known identity of a Handyman is Samuel Gerst. In an office on Finkton Docks, a Voxophone recorded by Samuel's wife Hattie reveals that he developed stomach cancer after several years of work at Monument Island. She then claims that Comstock provided her husband with a new body "through his servant, Fink." Later in the game, when Daisy Fitzroy is giving her victory speech in Shantytown, the player can encounter some Vox Populi members posing for pictures alongside the deceased Samuel near the Graveyard Shift. In his hand is a Voxophone containing a comforting message from Hattie.

The team at Irrational Games explains the concept behind the Handyman.
Combat quotes from the Handyman.
Kinetoscope about how Handymen are made. 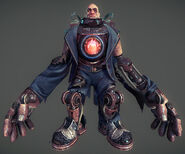 Full render of the Handyman.

A Handyman flexing his knuckles.

A closeup of a Handyman's face.

The Handyman at Fink Manufacturing.

A Handyman atop the roof of the Bank of the Prophet.

A Handyman in the Duke and Dimwit Theatre.

Elizabeth distressed near a Vox-Handyman.

A Handyman under the effects of Undertow.

A Handyman demolishes a Vox Gunship.

The early Handyman model as seen in the The Columbian Archeological Society.

The Surgical Suite where the Autobodies are manufactured.

A dead Handyman on an operating table.
Add an image to this gallery 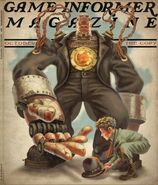 A game piece figure of Handyman, seen in the board game, BioShock Infinite: The Siege of Columbia.

Concept of a Merged Handyman, only seen in Pax East 2012.

Closeup of a Merged Handyman's face. 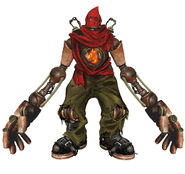 A Handyman in action, as seen in early gameplay.

A Handyman in an early version of Emporia. 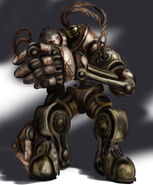 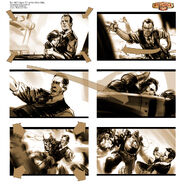 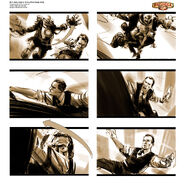 An illustration of a Handyman by Dan Milligan. 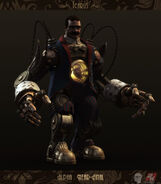 The near finished Handyman model for the BioShock Infinite Premiere Trailer. 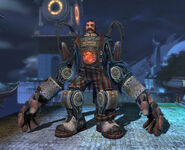 Handyman in the TV commercial of BioShock Infinite attacking Booker.
Add an image to this gallery

Retrieved from "https://bioshock.fandom.com/wiki/Handyman_(Enemy)?oldid=321905"
Community content is available under CC-BY-SA unless otherwise noted.