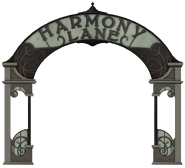 “Father OF LIES
YOU SEE NOTHING.”
― Vox Populi defaced Billboard[src]

Harmony Lane is a sub-district of Downtown Emporia in Columbia. It was originally a residential district containing the Emporia Towers and several stores, including a pub.

Harmony Lane, as the name implies, was a calm and welcoming place before the uprising of the Vox Populi. Whether you lived in one of many housing complexes, enjoyed shopping at the Emporia Towers or just came for a walk on the observation bridge, the peaceful setting would keep you in a good mood.

Unlocking the Harmony Lane's gate in the Financial District leads to the Beggar's Alley, a shopping street now completely abandoned thanks to the Vox. Crates are left outside the seven businesses and one of them holds the Return to Sender Vigor. The only named business is Parker & Co. Excelsior Brand Canned Meats, which is an alternate entrance to the one found in the Financial District. Right before entering the Harmony Lane Plaza are three vending machines. Vox graffiti on a wall reads "RECLAIMED! FOR THE PEOPLE OF COLUMBIA!!!"

When Booker DeWitt and Elizabeth arrives here from either the Financial District or Downtown Emporia, it has become a Vox Populi stronghold controlled by snipers and is no longer harmonic. A pair of men struggle into view, only to be shot in the head and killed.

Red cloth hangs from the buildings and furniture is left out on the street. Sniper Rifles, additional cover and a Freight Hook can be brought in through Tears. A Decoy Tear is set on the bridge in the middle and the one going under it has a bottle of Salts and a Lockpick. The defaced Billboard of Zachary Hale Comstock on top of the Pub building now reads "Father OF LIES YOU SEE NOTHING."

The Emporia Towers were a upper-class residential and shopping building. Only the reception is accessible for the player after unlocking the door (which strangely requires Elizabeth to use a hairpin instead of a regular lockpick), as both elevators are broken. After venturing in here, two Vox Populi will come sprinting in.

This apartment building, included in the Emporia Towers, is locked and as soon as the doors open, a male civilian will come running towards the player with his baton, likely mistaking Booker for one of the Vox. Only the first floor is searchable, as the stairs are blocked by debris. The player will find a Gear, a Medical Kit and a bottle of salts among the mail boxes.

This nameless pub was where friends could met and enjoy a relaxing evening. The business had both indoors and outdoor seating and an impressive wine cellar.

The citizen did their best to barricade the pub by boarding up the windows, but were no match for the Vox Populi's arsenal. By the looks of the burn marks on the walls and collapsed window, a heavy artillery weapon was used. The once stylish bar only has a few bottles left (including a bottle of Salts) and is covered in debris and capsized furniture. The gramophone on the bar table plays Helen Kane's "Button Up Your Overcoat" and a Hand Cannon can be found behind it. A couple enjoying a glass was shot dead in their booth and another man rests by the piano.

Downstairs is the wine cellar containing wine racks and a small vine tasting area. An employee of the pub is held captive by two members of Vox Populi, forcing him to serve them the pub's finest wine. On one of the tables nearby is a Tarot reader who has been stabbed in the back. A Columbia Tarot Deck sits nearby her corpse. Lady Comstock's voxophone Beyond Redemption can be found in a crate and many barrels contain supplies.

The entrance to Harmony Lane from the Financial District.

A bottle of Return to Sender in a crate.

The vending machines of Beggar's Alley.

A citizen fleeing with his comrade, moments before being shot.

A street in the plaza.

The bar of the pub.

The seating area of the pub.

Pain in the back.
Add an image to this gallery

Retrieved from "https://bioshock.fandom.com/wiki/Harmony_Lane?oldid=314667"
Community content is available under CC-BY-SA unless otherwise noted.