“With this damn faulty memory of mine, I need to record a clue so I don't forget the keycode.”
― Harold Darby[src]

Harold Darby was a citizen of Rapture and employee at Persephone.

Darby was a forgetful man, so he recorded a message to remind himself of a keycode to a locked room in the Recreational Therapy room of Inner Persephone. Cleverly, he reminded himself not in numbers, but with clues that only he would understand. His clue to remember the code was "Brown Legs, Red Mouths, Blue Arms, and Green Eyes." This refers to the number of each of these objects depicted in the paintings on the wall across from his corpse. While recording this message, Harold was hit with a metallic object which apparently killed him.[1]

His unused Audio Diary Petty Theft clarifies that he was a member of the prison staff and not an inmate himself. This explains why he would have the code for the supply closet. He worked in the administrative wing and was irritated by a rash of thefts.[2]

His audio diary can be found on his corpse, which sits frozen and upright in the chair he used for recording. The most likely suspect is a nearby Splicer, who can be found painting a picture of his inert body.

Harold's corpse was the perfect motive. 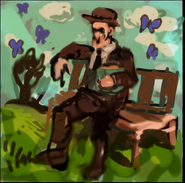 The painting.
Add an image to this gallery

Retrieved from "https://bioshock.fandom.com/wiki/Harold_Darby?oldid=305136"
Community content is available under CC-BY-SA unless otherwise noted.