“'Rise, Rapture, Rise!' Nuts! That stuff was stale before it came out Cohen's pen.”
― Hector Rodriguez[src]

Hector Rodriguez is one of Sander Cohen's former disciples, held prisoner by Cohen in Fort Frolic of Rapture. Cohen asks Jack to kill him and photograph his corpse to complete his "masterpiece". Rodriguez comes to believe that art is "all grift" and that Cohen's favored position with Andrew Ryan is simply because Cohen's songs are just pro-Rapture propaganda. It is assumed he did some dirty work for Cohen based on his rantings.

Hector Rodriguez can be found in Eve's Garden. However, he does not appear until after Jack heads backstage and views the ghost sequence featuring Jasmine Jolene.

Upon returning to the stage area, the player should hear Hector ranting drunkenly about how poor the service in Poseidon's Plaza has become. The moment he becomes aware of Jack, he will get up and run. It is possible to land a shot on him before alerting him. Like Silas Cobb, Hector fights just like a Nitro Splicer. He throws Molotov cocktails at the player when he is at a distance, but if the player attempts to get closer, he runs off throwing Molotovs over his shoulder.

A good strategy is to place some cyclone traps at the edge of the stage, blocking the path from the bar to the door. That way, when the player comes back out and Rodriguez starts running, the traps will take a big chunk from his health. If he still takes off running, don't worry about him getting away. If Jack falls behind for some reason, Rodriguez waits for him. Another similar strategy involves piling up several drink bottles near the door and setting a single Proximity Mine there. The combined effects of the explosion and the fire should kill him eventually.

Probably the simplest way to kill Rodriguez is headshotting him with the Crossbow. After he runs out of Eve's Garden, if the player inches out of the exit doorway slowly, he'll see Rodriguez standing completely still, waiting for the player to chase him. One steel-tipped bolt to the head kills him instantaneously on most difficulties; on the highest difficulties, one shot kills can still be achieved with an incendiary bolt.

If chasing Rodriguez, the best choice is to pick weapons and ammunition that doesn't require much aim to deal a lot of damage. This includes the Shotgun (especially with Electric Buck or Exploding Buck), the Chemical Thrower, and the Grenade Launcher. Other weapons are capable of killing him eventually, but at a much slower rate.

Plasmids can come in handy in various ways: setting a Cyclone Trap right in front of Hector will send him flying, Electro Bolt and Winter Blast will temporarily immobilize him, and Incinerate! will whittle down his health. One can also stand still, wait for him to stop, and project back at him the Molotov cocktails he throws with Telekinesis. Enrage, Security Bullseye and Hypnotize Big Daddy can also provide support, as well as distracting him. Electro Bolt is ineffective and Sonic Boom seems to have no effect.

The following are phrases that Hector Rodriguez says in BioShock. The name of the source audio file is listed when known. 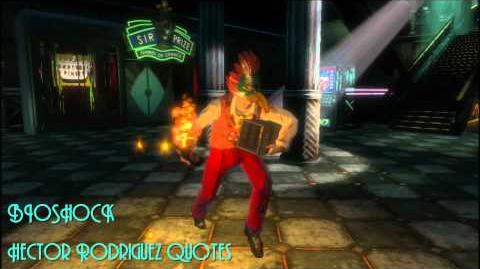