“…You can't cut off the power, comes right from the volcanic vents… Ryan always gets his juice…”
― Kyburz[src]

Hephaestus (or Hephaestus Core[1]) is the eighth level of BioShock. Jack reaches Hephaestus via bathysphere from Fort Frolic. His objective here is to gain entrance to Ryan's office in Rapture Central Control, in which the city's founder has barricaded himself.

Hephaestus, home of the Hephaestus Power Facility, is the main power production source for Rapture and is located at the Southern end of the city. Designed by Andrew Ryan, it harnesses the heat from geothermal vents on the ocean floor. Hephaestus was one of the initial facilities built in Rapture; without it, Rapture could not have been powered. Hephaestus also contains the private office of Andrew Ryan. In the post-construction era, many of the specialists who built Rapture worked in the various workshops or became maintenance employees.

During the civil war, the facility was continuously attacked by rebels, as taking control of the city's main power source would have granted them victory in the war. Many workers were killed during these attacks, and a number of attempts were even made on Ryan's life. ADAM sickness and increased paranoia of being murdered lead to workers killing each other, and the workshops are now littered with the corpses of people who once kept Hephaestus functioning.

The Metro station to Hephaestus is whirring with life, as massive geared machines turn in the water and large pipes in the walls and ceiling pump fluids around the facility. The station, decorated with Ryan's image of strength, is far cleaner than any of the others visited by Jack, but the metal floor and wall paneling makes the station feel harsher than any of the others.

A glass tunnel circles a large rock formation on the sea floor and connects to the main building. The tunnel is mostly empty save for two Splicers.

Central Control is made up of a series of rooms in which the monitoring and distribution of power generated in Hephaestus was overseen. The first is the entry point to Ryan Industries. A dislodged pipe in this chamber leads to a hiding space. In the next area, an unseen Splicer attempts to lure Jack into a false sense of security with lavish gifts, but it's an ambush. The next room is the most gruesome in Central Control: Ryan's Trophy Room.

This room is on the way to the control center and office of Andrew Ryan, which is guarded by an electromagnetic lock system. Here various corpses — including those of Anya Andersdotter and Bill McDonagh — are impaled on the pillars, as part of Ryan's morbid warning display.

Upon entering the room, Ryan delivers an unsettling sermon, referring to his trophies as "worms", and tells Jack that he is no different from those others who have tried and failed to assassinate him. He menacingly concludes his speech by saying: "I haven't chosen a spot for you on the wall yet… let me know if you have a preference."

The Breadwinner Splicer model can be heard referencing this trophy collection if one listens to his dialogue. Supervisor Kyburz also mentions it in his audio diary, Device Almost Finished.

The audio diary found on Anya Andersdotter's corpse gives a clue for an ersatz method of breaking into Andrew Ryan's barricaded office.

Most of the machinery for regulating heat transfer from the geothermal fluid is located here. On the lower levels, Jack finds an audio diary hinting the location of an EMP bomb.

Here are various workshops for Hephaestus including Kyburz' office. Hidden behind a crawlspace door, Jack will find Kyburz' incomplete Electromagnetic Pulse Bomb. Jack must locate the missing parts around Hephaestus.

This facility directs the flow of hot fluid from the geothermal vents. Jack redirects the pipes to boil away the water while under an onslaught by Splicers. Afterwards, an elevator takes him down to the Core.

The huge machinery of Harmonic Core #3 serves as one of the primary power sources for Hephaestus. Jack disables the core by creating a sympathetic overload with Kyburz' completed EMP bomb. 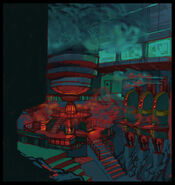 A sketch of an engineering area.

The prototype Bouncer, seen in an early version of Hephaestus.
Add an image to this gallery

Retrieved from "https://bioshock.fandom.com/wiki/Hephaestus?oldid=315738"
Community content is available under CC-BY-SA unless otherwise noted.