For the Singleplayer Level of Hephaestus, see Hephaestus.

Hephaestus is a retooled environment for BioShock 2 Multiplayer of the Hephaestus from the first BioShock. Hephaestus is the main generator of power for all of Rapture. Jacob Norris, a multiplayer character, is said to have been one of the deep sea welders who built Rapture; it is known from his audio recording Rapture's Heart that he was present when construction on Hephaestus was finished.

Hephaestus is the main power production and engineering facility in Rapture. Hephaestus, designed by Andrew Ryan, is one of the oldest parts of Rapture and harnesses geothermal energy to power the city. The area was a workplace for many of the engineers in Rapture, such as Kyburz.

This was the area through which visitors and workers would enter Hephaestus. There is a large bust of Andrew Ryan guarding the lobby. A closed Gatherer's Garden is in this area, as well as an ADAM Corpse and Little Sister vent for Capture the Sister. This area leads to the Workshops, Crew Quarters and Core.

This area, located off of Lobby and Heat Loss, was the planning and operations base for the employees of Hephaestus. The area contains a large Australia Day poster, a vending machine, a Machine Gun Turret and access to Kyburz' office and Administration office that contains a breakable wall and vent.

This area was the location where monitoring of geothermal heat was conducted. The area houses the large monitor system, vending machine, Little Sister Vent, and a balcony that is accessible with Geyser Trap or Leg Up.

The Core is the main production area for geothermal energy. Located in the center of this area is a Harmonic Core. This area contains an ADAM Corpse, a vending machine near the Lobby entrance, and a closed off access to E.V.A. Preparations.

Geothermal Control was where the control of magma was monitored and controlled for energy production. In this room it is possible to see the hot magma being fed through the pipe toward the Core. Located in this area is a Machine Gun Turret, a vending machine, and several oil drums. It is possible to use the vending machine in this area and Geyser Trap or Leg Up to jump out of the map onto the pipes or magma.

This Workshop area was where most of the workers other than administrators conducted their work, research, and preparations. There are scattered blueprints in the area as well as lockers of workers. The area houses several oil drums and a vending machine.

The Hephaestus section in the BioShock 2 Signature Series Guide. 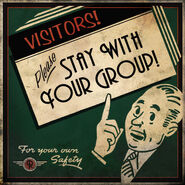 An alternate view of the Ryan Industries Lobby.