“Put the PEP back in your STEP!”
― Hop-Up Soda advertisement[src]

Hop-Up cola is a brand of soda in Rapture, established in 1949.[1] Though commonly mistaken for a bottle of beer, there is no ill effect to consuming large quantities of this beverage. Drinking soda will restore a small amount of EVE, and splicing the Extra Nutrition line of Gene Tonics will increase the yield of EVE each bottle gives.

Interestingly, this soda could be found in only one place in the first BioShock, in a trash can in Hephaestus where the game erroneously labels it "Coffee".

Hop-Up cola is far more common in BioShock 2 as a consumable item, and posters advertising it can be seen in many places. Its bottle cap is even seen on the back of the Bouncer Big Daddy doll.

Numerous bottles of Hop-Up cola can be seen scattered all over the floor of Reed Wahl's office.

Crates of Hop-Up cola are worn by male Early Splicers in Fontaine's Department Store and can be found littered around the backrooms and storerooms of businesses. 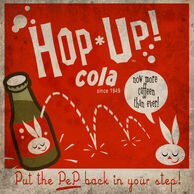 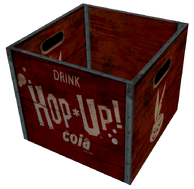