For the enemy type from the BioShock series, see Houdini Splicer.

Houdini is a BioShock 2 Multiplayer-exclusive Plasmid which allows the user to turn invisible. When using this Plasmid, disappearing and reappearing creates the same "cloud" effect as Houdini Splicers. When invisible, the user cannot attack or perform any sort of action, but can still take damage. 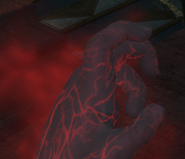 The player using Houdini.
Add an image to this gallery

Retrieved from "https://bioshock.fandom.com/wiki/Houdini_(Plasmid)?oldid=316244"
Community content is available under CC-BY-SA unless otherwise noted.