Hudson's Fine Clothing[1] is a clothing retailer operating out of Columbia in BioShock Infinite. 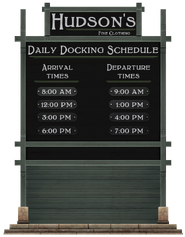 Hudson's was a long-established business before coming to Columbia, but the owner found the allure of the flying city too tempting to pass up, and so brought the business to the sky. The clothing company catered to the needs of Columbia's middle and upperclass citizens and soon flourished. The retailer set up a permanent shop near the Market District next to the bank and a mobile one on a hovering island.

Like many self-propelled stores in the flying city, it travels to different locations. However, it is always scheduled to dock near the statue of Zachary Hale Comstock at New Eden Square, a popular shopping district in the city, during the hours of 8, 12, 3, and 6. In addition to selling everything from suits and dresses to cloaks and furs, Hudson's performs in-house hat cleanings and shoeshines. With its designated station so near to the Church of Comstock, the store is always very welcoming to the new pilgrims of Columbia. 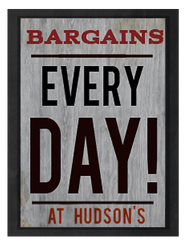 Moments after Booker DeWitt arrives in New Eden Square, so too does Hudson's. Inside, a citizen receiving a shoeshine complains about incomplete landscaping problem. The store has a radio, a Voxophone, and a Kinetoscope to interact with.

A different picture presents itself in the war-torn Downtown Emporia, located directly opposite to the Financial District gate in the South Market District. Booker and Elizabeth arrive at the store in the aftermath of an inner fire, with fire spread to the exterior wall, burning the Vox-pennant stuck to the marquee, but leaving the windows intact. Upon entering the duo sees the extent of the fire: The floor has partially collapsed, leaving a large hole in the center of the store, the main counter and its Cash Register have been toppled, only a few shelves have survived and all the clothing in the showroom has been burned to nothing, except for a jacket and a hat on a coat rack by the entrance. The collapsed floor reveals a basement storage, which the player can enter via stairs or simply by jumping down. The remains of the first floor have landed on the business' washing station, leaving the facility's washing machines ablaze in rubble. Several pipes have burst thanks to the fire, leaving a leak in the basement, which houses crates, laundry trolleys, washing equipment and a Safe, which requires 3 Lockpicks to open and luckily, one of the trolleys holds a Locksmith Bag, containing 3 picks. On a shelf with laundry detergent next to the sink is a Code Book, required for a Vox Cipher. Upon leaving, the player can spot a lockpick next to the shelf on the top of the stairs.

Coming in for a landing.

A wide variety of products and services.

The shoeshine hard at work.

Shirts and suits on display.
Add an image to this gallery

The code book in the basement.
Add an image to this gallery

"Baxter" poster in the background of the Battle Royale level.

Poster inspiration.
Add an image to this gallery

Retrieved from "https://bioshock.fandom.com/wiki/Hudson%27s_Fine_Clothing?oldid=320336"
Community content is available under CC-BY-SA unless otherwise noted.