“Cry out for Big Daddy's help, make him think you're a Little Sister. Watch as he fights to protect you.”
― Advertisement[src]

Hypnotize Big Daddy is a Plasmid available in BioShock. When selected, it manifests itself as a pale green globule formed from Jack's palm, with visible deformities on his wrists and hands. Hypnotize Big Daddy is an active Plasmid that instantly releases a globule that homes in and bursts on the nearest Big Daddy within the player's central field of view at the cost of EVE. If this Plasmid is used on a Big Daddy that is guarding a Little Sister, the Little Sister will either retreat to a wall vent or will find a new Big Daddy.

Upon bursting, the target Big Daddy is splashed with a green liquid substance, immediately causing him to temporarily protect the player as he would a Little Sister. They will attack any enemies in the area that are hostile to the player. The light glowing from the face of the affected Big Daddy will turn green to indicate that he is friendly, and will flash when the Plasmid reaches the end of its effects. Directly or indirectly attacking a hypnotized Big Daddy will cause him to become hostile. A Big Daddy that is hostile to the player cannot be hypnotized. 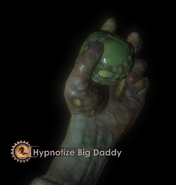 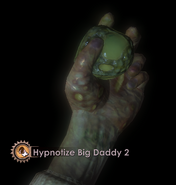 An Elite Bouncer Big Daddy under the effects of Hypnotize Big Daddy.

In BioShock 2, this plasmid was adapted into the plasmid Hypnotize. This allowed players to "befriend" enemies temporarily, making them fight on one's side for the duration of the effect or until death. It would only "befriend" the enemy if charged - an uncharged Hypnotize had the same effect as Enrage.

A poster advertising the Hypnotize Big Daddy Plasmid can be seen in the Bathyspheres DeLuxe Information kiosk. When approached, Elizabeth will curiously read the title out loud, while Booker comments on the inconvenient release date, considering the Bouncer roaming freely on their floor. However, the drinkable Possession Plasmid has a similar effect on it, albeit not as long lasting.