The Imprinting Studies are a set of locations in the Fink MFG Research Laboratories of the Factory. In this series of laboratories, different scientific experiments were performed on animals in an attempt to learn how to make the Songbird imprint on a young girl.

Elizabeth has to venture here to retrieve a Hair Sample for Yi Suchong. 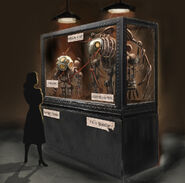 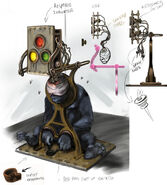 Concept idea for a hermetic chamber with pigs. 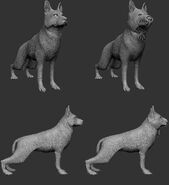 Dogs who have been left to their fate.

A Big Daddy observed through a tear.

The Prototype of Songbird.

A failed attempt at bonding.

Replicas of the Bouncer Big Daddy and the Songbird.

Fink's sketches based on Big Daddies seen through Tears.

Fink's sketches based on Big Daddies seen through Tears.

Elizabeth and the Songbird bonding.

The "subject's personal effects", including the hair sample.