“This place is the absolute definition of despair. Here we are, locked away from the outside world, suspended over a pit with no hope of release.”
― Thomas[src]

Inner Persephone is the ninth and final level of BioShock 2, following Outer Persephone, which also takes place in the Persephone Correctional Facility.

Inner Persephone is Persephone's North Detention Wing and its main entrance. Here, the political prisoners of Rapture spent the majority of their time within the internment camp. The facility is centered around a docking platform with wings for separate wards branching outward from it and a metro station. The Holding wing contained the holding cells, laundry facility, and cafeteria. The other wings include an Infirmary, and the Therapy wing which also contained administrative offices and a Jet-Postal station.

Life within Inner Persephone was both hard and hopeless for the inmates. If the general state of despair didn't drive the detainees to madness, then the medical experiments surely would. On multiple occasions, the prisoners threatened the warden with unrest, but it was imprisoned psychiatrist Dr. Sofia Lamb who finally united the group in a coup. While the city above tore itself apart, the occupants of Inner Persephone bided their time until the worst of the fighting was over. Some time after Lamb seized control of the prison, portions of the Infirmary and Therapy wings were converted into pediatric wards to house the new Little Sisters.

Subject Delta and Eleanor Lamb seek to board a large spherical lifeboat that Augustus Sinclair had docked next to Persephone in case he had to flee the facility quickly. Unfortunately, Sofia Lamb has locked it down. They need the key from Sinclair, but Lamb has captured him. Subject Delta finds that Sinclair has been turned into an Alpha Protector, his consciousness and vocal power intact but his body controlled by Lamb. Subject Delta must follow Sinclair, now Subject Omega, into the holding cells and forcefully kill him (at his request) to get the key.

Sofia Lamb dumps the Lifeboat's ballast into the docking area, making it unable to disengage. Eleanor comes up with an idea to use the energy of both herself and the captive Little Sisters in the therapy wards to boil the ballast water away. Subject Delta must clear the two nursery areas of Splicers and Alpha Series so that Eleanor can gather the children (or harvest them, depending on the player's treatment of the Little Sisters in the previous levels.)

Next, Delta has to fight off one last wave of Splicers and Alpha Protectors while Eleanor and the Little Sisters boil off the ballast water. He must flood the docking control room, by blasting out two thick glass pipes, to equalize the pressure between the dock and the ocean. Finally, Delta and Eleanor flee to board the rising escape vessel, but they run into a hallways piled high with explosive charges rigged by Lamb's followers. At this point, Eleanor teleports herself up to the escape craft, narrowly avoiding the force of the explosion, but fails to grab Delta's hand. Instead, Delta quickly swims close and grabs the rail of the vessel as it passes. They rise to the surface, and the events of the endgame play out according to the choices of the player earlier in the game. 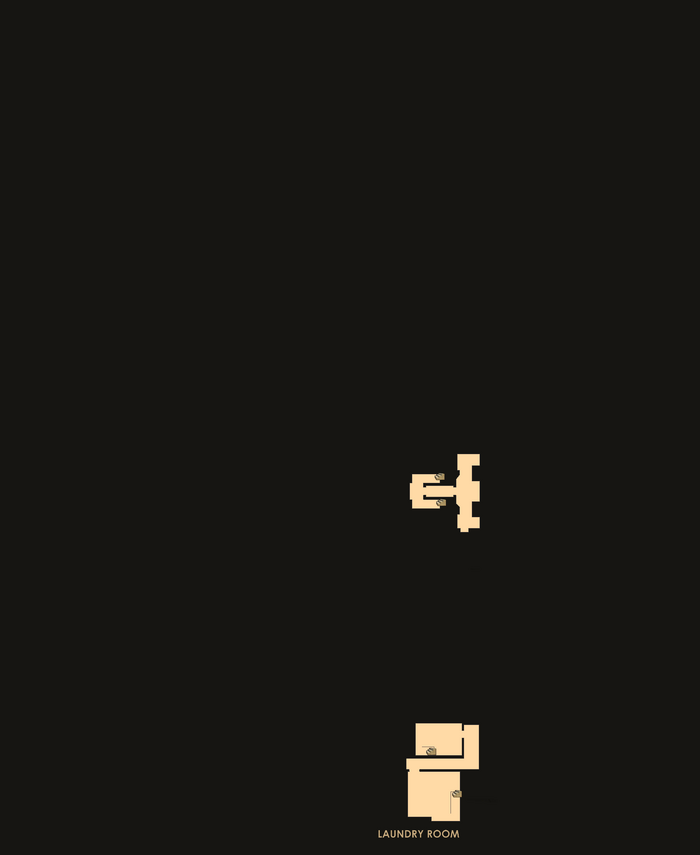 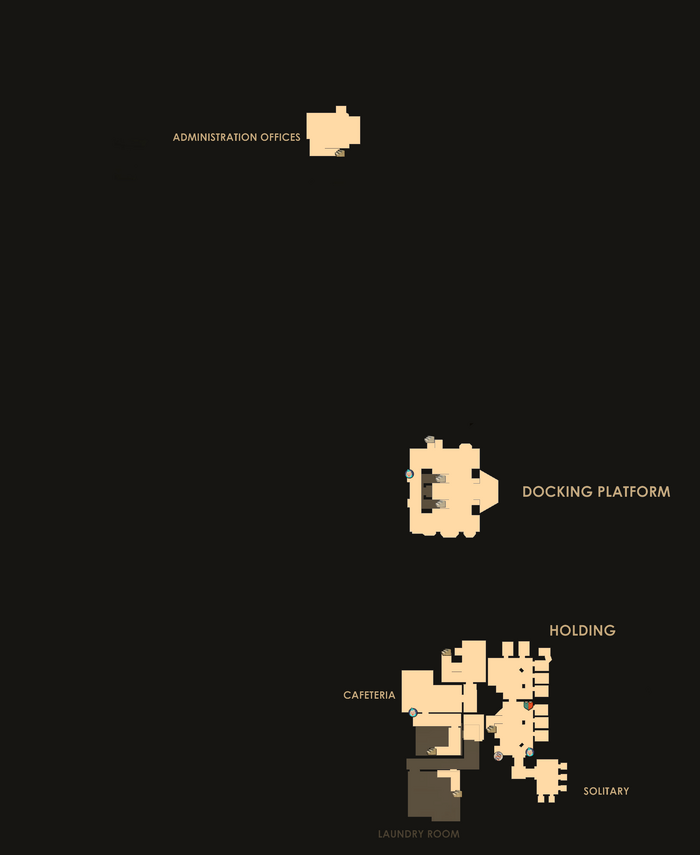 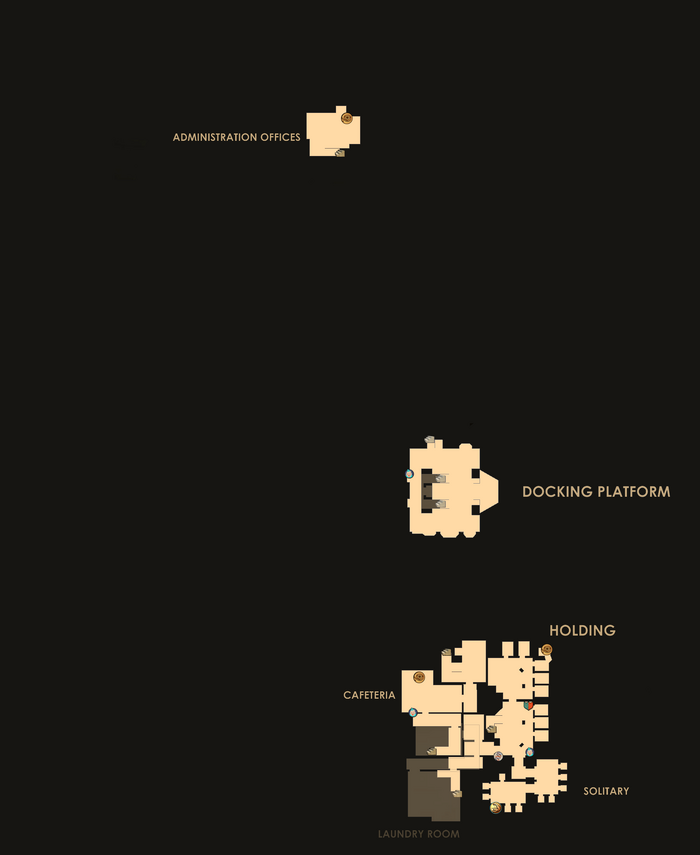 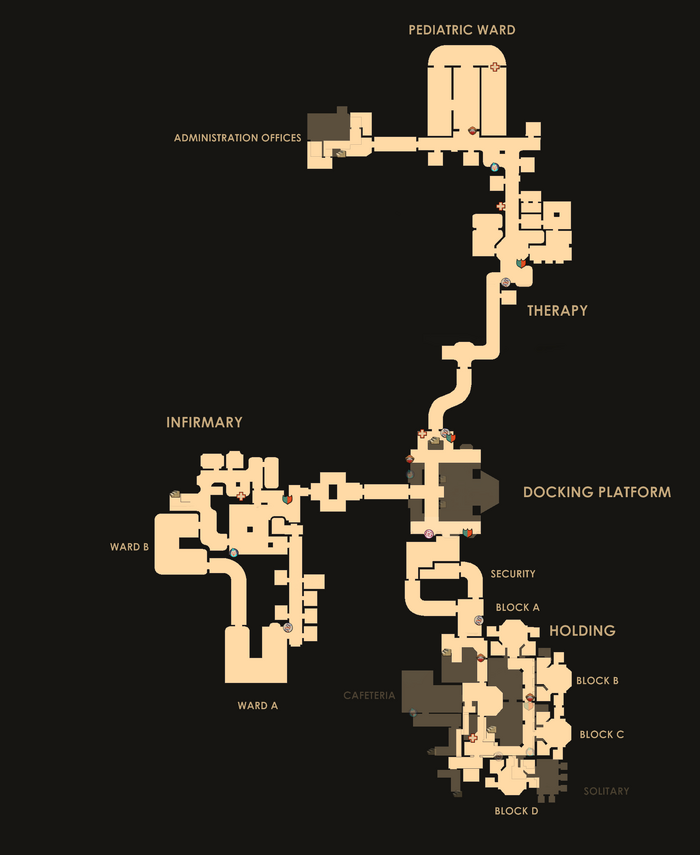 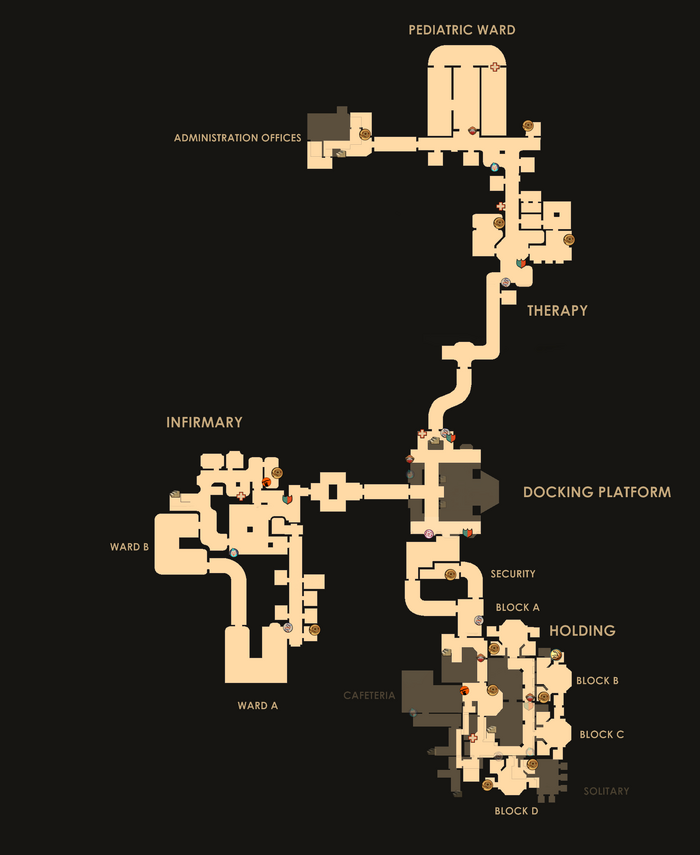 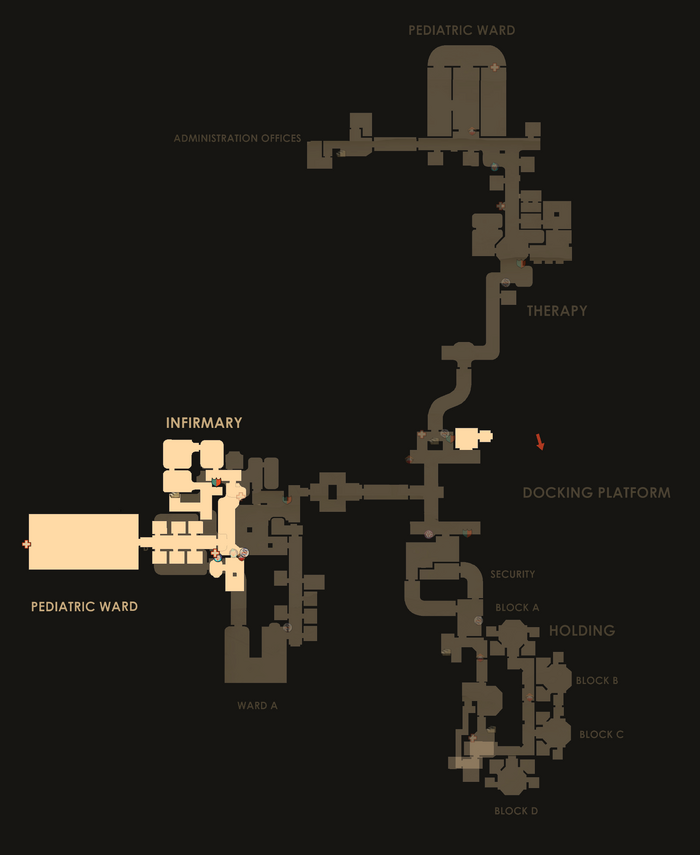 *The red arrow marks the location of the explosive blocked hallway. 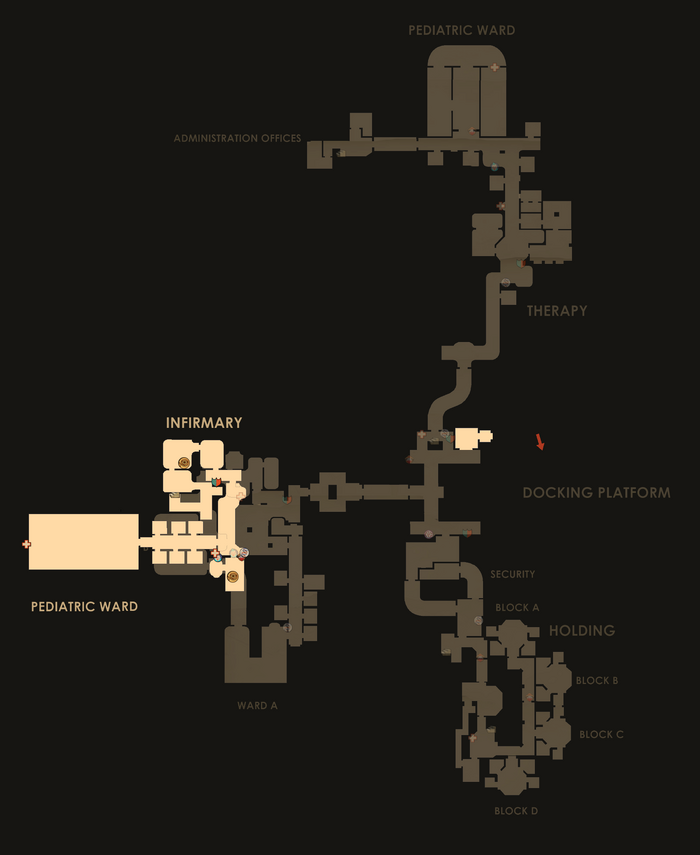 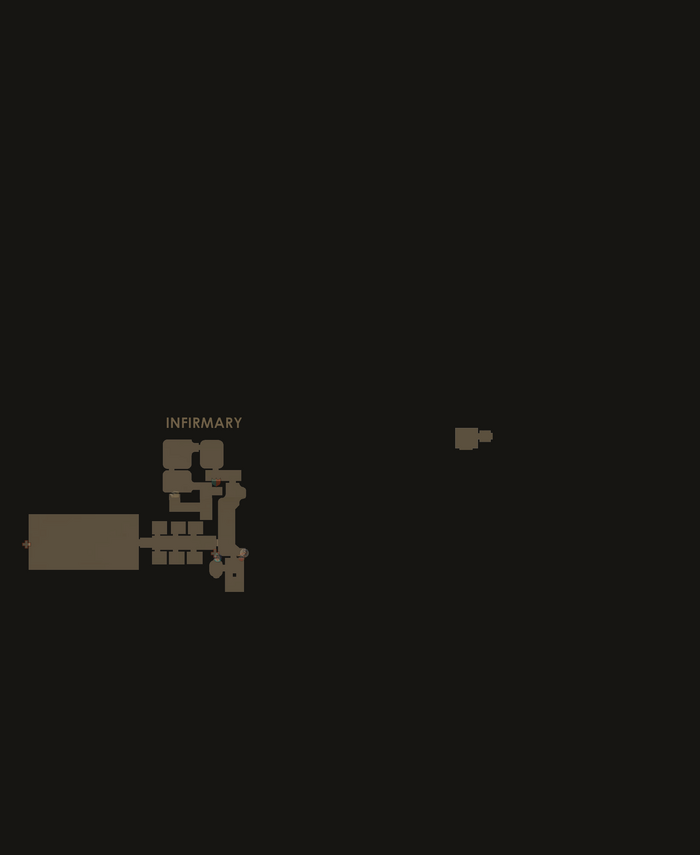 Take care of Eleanor's advice to either get into the security office or lure Sinclair out. There are actually three major ways to get to Sinclair, with variations on each:

There are also multiple ways to acquire the security code:

There is a locked room in the Therapy section of Persephone. The door code is not found numerically anywhere in the game. Instead, the player must solve a puzzle in a nearby audio diary to figure out the code.

The clues are: Brown legs, Red mouths, Blue arms, Green eyes. The clues refer to the paintings on the wall in front of the victim near the locked door: four brown legs (of a dead deer), one red mouth (of a screaming man), four blue arms (of two drowned victims), and six green eyes (of a group of three doctors). The answer is 4146. Using the code on the door will unlock it, revealing a safe, a First Aid Kit, an EVE Hypo, and rare ammunition.

To get to the Little Sisters (and the 100 ADAM gained from Eleanor rescuing/harvesting them), Subject Delta must get through the two pediatric wards in the Infirmary and Therapy Wings, both of which are heavily guarded. Therefore, it is recommended to equip all combat-related Gene Tonics and stock up on ammunition before entering.

The first Pediatric Ward in the Therapy Wing is guarded by two or three Alpha Series, armed with Machine Guns and Shotguns. Before dealing with them, it is advised to quickly hack the Health Station in the back of the room and put down traps or Mini-Turrets to deal with them quickly. After, a wave of Leadhead Splicers, Houdini Splicers, and an Elite Brute Splicer will attack Delta. Anti-Personnel Rounds and Rivets are both effective and realtively cheap against these enemies. After the enemies are defeated and the Little Sisters saved, the player will be given 50 ADAM.

The second Pediatric Ward in the Infirmary Wing is also heavily guarded. The first wave of enemies include Houdini Splicers and Alpha Series wielding Machine Guns and Launchers. After dealing with them, the player will deal with more Houdini Splicers, three or four Leadhead Splicers, and Elite Brutes. Like the first ward, there is a Health Station and enough space to deploy traps and Mini-Turrets. Securing the area and allowing Eleanor to save the Little Sisters will reward the player another 50 ADAM.

Eleanor and the freed Little Sisters will teleport back to the escape submarine, but will wait for you to approach the glass to start boiling off the ballast water - at which point waves of enemies will start attacking. Follow Eleanor's advice and only approach the glass to start this after you're ready - buy your final ADAM upgrades from the Gatherer's Garden on the second floor. Set any traps you want to plan out in advance. Spend all of your money in the two vending machines to max out all of the ammo you can carry (maybe saving a little for more First Aid kits if you want to rush back to the vending machine for more than you could carry).

The waves of enemies will include Alpha Series, Brute Splicers, Houdini Splicers, and Leadhead Splicers. Now is the time to whip out all of your heaviest weaponry: heat-seating rockets, rocket spears, mini-turrets, etc.

After much combat, Eleanor will announce that they have burned off all the ballast water, but then the entire room partially floods with water. The regular waves of enemies will end, but are now replaced by endlessly respawning Alpha Series and Brute Splicers (the Houdinis and Leadheads stop appearing). There is little point in fighting them off directly unless you've still got a lot of ammo left and something to prove - they just keep coming. As Eleanor directs you, the submarine can't take off until you equalize the water pressure by completely flooding the room, which you have to do by destroying two large water tubes in the ceiling. They don't take much ammo to destroy though you have to do it while fighting off the waves of heavy enemies attacking from your sides.

After the room floods, head back to the entry to the submarine, to see the end of the game and your fate. 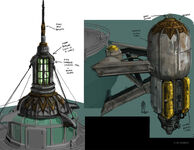 Concept art for the beacon and engines on Sinclair's Lifeboat. 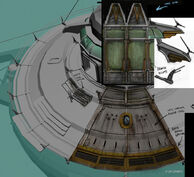 Meshes for the final scene on the Lifeboat, showing how detailed textures needs to be. 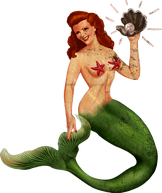 The mermaid seen on Sinclair's lifeboat.

One of the glass pipes.