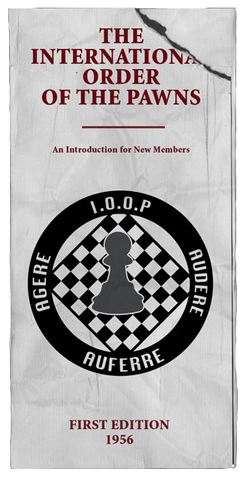 The International Order of the Pawns was a covert organization created by Orrin Oscar Lutwidge in 1956. Its main purpose was to research the mystery surrounding the Vanishing and how it related to the disappearance of Andrew Ryan and the building of Rapture. This organization had members around the world, each referred to by a code name of a pawn color and degree. Late in Lutwidge's search for Rapture, he became more paranoid, fearful that others would uncover the secret of Rapture. Thus, he began to direct the efforts of I.O.O.P. toward laying false evidence to mislead other researchers, such as Celeste Roget. Lutwidge enlisted the help of the Red Pawn to accomplish this, but in the process he alienated some of his previously faithful pawns who saw his quest become increasingly personal and obsessive.

"Attention Pawns: The game is afoot. Please adjust your boards accordingly; White Pawn to B5. Black Knight to G4. White Bishop to H3. Black Pawn to A3. White Queen to H5. The game is afoot. Grey Pawn has made contact with a new player. New gambits will be relayed. Act with extreme caution -- the Red Pawn is in motion. All Pawns in Europe, standby for further instructions. This is not a drill."

On December 24, 2009, a new phase of SitS viral marketing began with the mailing of I.O.O.P. membership cards. Each card has a different number (Originally all beginning with 100 and ending in two digits, However later the beginning digits seem to be random), and each member has been given a different denomination thus far. The denominations appear to be materials (such as Denim, Alpaca or even Concrete) or colors (Foxglove, Olive Drab or Apricot). At this point, all initiate Pawns have been initiated in the "1st degree." Whether this will remain true for all of the initiated will only be determined when the mailing program ends. How these cards tie in with the site's story remains to be seen. It has not been addressed yet as of this writing.[1] 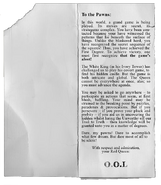 Inside of the I.O.O.P. introduction pamphlet 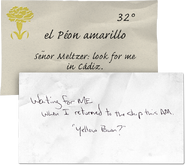 Note from the Yellow Pawn

A membership card for IOOP mailed out, giving fans their own Pawn color and status.

The back of the membership cards.
Add an image to this gallery

Retrieved from "https://bioshock.fandom.com/wiki/International_Order_of_the_Pawns?oldid=266284"
Community content is available under CC-BY-SA unless otherwise noted.