“The Thinker has taken note of your new toy. A firecracker before the eyes of God.”
― Reed Wahl[src]

The Ion Laser is a new weapon introduced in the Minerva's Den narrative Downloadable Content for BioShock 2. It fires a beam of concentrated energy, dealing continuous damage. As with all weapons in the game, it has a quick-melee attack, during which Subject Sigma raises the gun and bashes the target with it.

The intensity upgrade increases the Damage output of the Ion Laser's beam.

This upgrade increases the damage dealt by the Ion Laser.

A Lancer wielding the weapon.

Concept art for the Ion Laser. 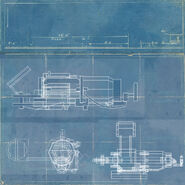 Blueprints for a unique Ion Laser designed for a Laser Bot, found inside the Robotics Workshop of McClendon Robotics.