“…you'll be needing Dr. Steinman's key. He's the one what runs this place. But I don't expect him to hand it to you out of the milk of human kindness. Steinman ain't that kind, and frankly, I'm not even sure he's still human.”
― Atlas[src]

Dr. J. S. Steinman, M.D., is the overseer of the Medical Pavilion. An accomplished surgeon, Steinman rose to a degree of prominence throughout Rapture, but ADAM abuse caused him to lose his grip on reality.

Career on the Surface[]

J. S. Steinman was born into a Jewish-American family[2] and was a respected medical professional at the Benjamin Church Medical College. Steinman had a successful career as an orthopedic surgeon but earned his highest accolades in the field of plastic surgery, inventing techniques that revolutionized the field. He was sorely missed by his friends and colleagues after disappearing to go to Rapture. His close friend, Dr. Richard Clerkwell, even hired a private detective to attempt to track him down.[1]

Because of his great renown in the field of cosmetic surgery, Steinman was one of those invited to Rapture by Andrew Ryan. There, he set up a medical practice in the Medical Pavilion level of Rapture and offered beauty to those who could afford it. When ADAM became available, Steinman saw it as an opportunity to revolutionize his field, making it possible for surgeons to truly "sculpt" flesh with ease.[3] However, the negative side-effects of repeated ADAM use soon caught up with Steinman, and his mind deteriorated.

A perfectionist, Steinman fell in love with his work, so much so that he became obsessed with human anatomy. Wanting to become a "Picasso of Surgery",[4] Steinman began to mutilate his unfortunate patients' bodies in horrific ways, usually resulting in death.[5] Many Splicers refer to him throughout the BioShock series, usually saying that Steinman will fix their deformities, even in his current state-of-mind.[6]

Dr. Steinman, growing so utterly obsessed with making his patients beautiful, began to hallucinate Aphrodite, the Greek goddess of beauty, and looked upon her down the road of insanity.[7][8]

For years, even during his life in New York, Steinman had experienced hallucinations of Aphrodite speaking to him. This may have been partially caused by his use of cocaine and ether. Freed from the restrictions of society on the surface, Steinman felt that he could finally follow the divine inspiration of his goddess.[9]

On at least one occasion, Steinman purchased the bodies of rogue Splicers from Rapture's constabulary so that he could practice his art on living subjects. He saw it as an added bonus if his "patient" had been paralyzed in a fight with the police since he wouldn't need to administer anesthesia to keep the subject still during his carving.

In 1956, Frank Fontaine approached Steinman with an unusual request. Fontaine asked Steinman to perform surgery on himself and Reggie, making the underling look like Fontaine and Fontaine look like a completely different person. This was part of Fontaine's plan for his Atlas persona, and he made sure that Steinman never revealed his operation to anyone.[10]

After the 1958 New Year's Eve Riots, Dr. Steinman worked to reconstruct the face of Diane McClintock, who had been injured during the bombing of the Kashmir Restaurant.[11]

Andrew Ryan suspected that Steinman had been "working on her in more ways than one", and that the two of them had been romantically involved until Steinman lost interest in her.[12]

In 1959 Steinman continued further along his descent into insanity. He murdered his nurse, Ms. Chavez, when she threatened to turn him into the Rapture constabulary. After he ran out of willing patients, he began working on Splicers that Sander Cohen had captured in Fort Frolic.[13]

During his trek through the Medical Pavilion, Jack is required to find Steinman's key so he can disable the security lockdown in Emergency Access. As a result, Steinman is the first boss that the player encounters.

In the Medical Pavilion, the player can see many of Steinman's works of "art" painted on the floors and walls, as well as mutilated corpses left from Steinman's operations. In many cases, the mad doctor took photographs of female faces and modified them in eerie ways before posting them on the walls like framed artworks. His Audio Diaries are the first real exposure the player has to the total effects (mental and physical) of repeated splicing.

As Jack travels through the tunnel to Dr. Steinman's Aesthetic Ideals, Steinman can be seen on the television monitor addressing the "moral obligation" of beauty. When Jack enters the lobby of his domain, Steinman can be overheard wondering why humans have two of most body parts. The minute Steinman sees Jack approach he rushes into the corridor leading to his surgery, chucking a grenade behind him. The explosion causes rubble to block the entrance. After the player removes the debris, Steinman sets up a Turret and sends a Security Bot to attack Jack before retreating to his operating theater to continue his "art". There the player will be forced to fight him to the death.

Dr. Steinman is a relatively easy fight, as he will simply attempt to shoot the player with a machine gun. There are several different ways to go about winning the fight. The most straightforward, and probably hardest, is to shoot back; it takes a while to whittle down his health. One problem with this strategy is that once he is at low health, he will run over to heal at a nearby Health Station in a flooded alcove. Hacking the Health Station beforehand will set it to poison him when he uses it and helps to finish the battle more quickly.

Other possibly easier strategies include using the flooded alcove to shock him with Electro Bolt, and using the Telekinesis Plasmid to pick up and throw nearby gas canisters at his head, as well as a loose door in the right corner of the area that can inflict heavy damage on him (as well as provide protection from his shots). An oil slick near the operating table can also make the fight remarkably short: if Incinerate! is used to ignite either Steinman or the slick while he is on it.

There is also a nearby Security Bot and Turret in the hallway outside, both of which can be hacked before the battle begins. The Turret isn't very useful since it rarely has a line of sight to Dr. Steinman, but the Bot provides some extra damage, and hacking the Turret will ensure that there is one less thing that is shooting at the player if the fight moves out into the hallway. In fact, Steinman may attack the bot to the exclusion of anything else, making him an easy target so long as it is still fighting him, but this does not always occur.

Dr. Steinman's posters appear in the Spider Splicer stage (which is based on the Medical Pavilion, respectively) of the Worlds of Hurt challenge in the downloadable content Challenge Rooms.

Dr. Steinman is mentioned in the Audio Diary "Working for Sinclair" as being the one who supplied Augustus Sinclair with his "thousand dollar smile". He is also pictured in a painting above the case of a Little Sister relic in Siren Alley, showing him in his operating theater amongst his "failures" before his final confrontation with Jack during the events of the first BioShock.

A photo of J.S. Steinman is briefly seen in the Need to Know Theater film "Taking the Taint Out of Fontaine", along with other members of the Rapture Central Council. Steinman is a well-known figure in the city and a topic of discussion among the citizens of Rapture. A man uses a pickup line that mentions Steinman, with no luck.

Steinman is mentioned briefly by Atlas, commenting on how he learned to perform a transorbital lobotomy from Steinman's medical journal before he begins torturing Elizabeth. Atlas calls Steinman "a bit of a lunatic, but a fine surgeon."

The following are phrases that Dr. Steinman says in BioShock. The name of the source audio file is listed when known. 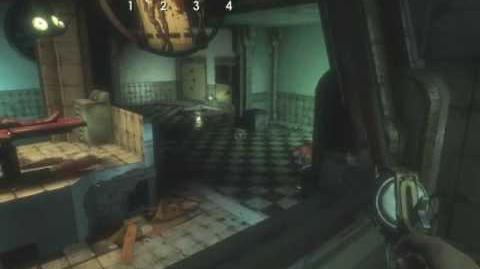 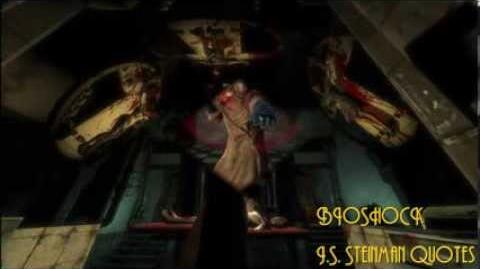 A close-up of Steinman's face. 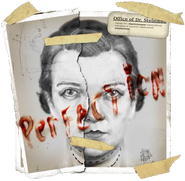 Steinman's works of art in the Medical Pavilion. 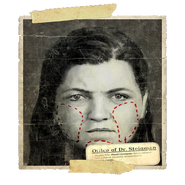 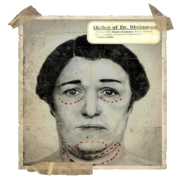 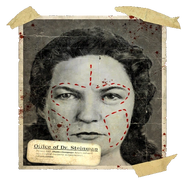 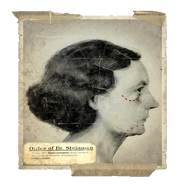 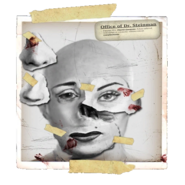 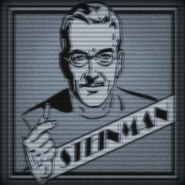 "Steinman's: We Care for You." 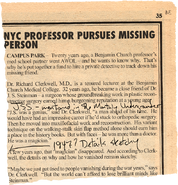 Article about the missing Steinman.