“Something tells me all that cold isn't comin' from the ice rink.”
― Booker DeWitt[src]

Jack Frost's Village is an entertainment pavilion in Fontaine's Department Store. During the events of the BioShock Infinite downloadable content Burial at Sea - Episode 1, Booker DeWitt and Elizabeth must journey here in their search for a bottle of Old Man Winter.

Back in the heyday of Fontaine's, Jack Frost's Village was the crown jewel of the Department Store building. The venue, a picturesque, polar fairytale land, recreated a little piece of the surface world the Rapture populace had left behind when they journeyed under the sea. More importantly to Frank Fontaine, the ice rink was a solid business he could capitalize off of. The place was a popular source of exercise and entertainment, so even customers who had no intention of shopping for clothes would journey to the Department Store just to buy a ticket. The site was also an ideal location to advertise the Drinkable Plasmid Old Man Winter.

Booker and Elizabeth enter Jack Frost's Village after duking it out with the Splicers outside. The facility is layered with snow, stalactite-sized icicles, and frozen corpses. The place is positively glacial, even for an ice rink. Booker suspects the excess cold is the result of the Frosty Splicer he and Elizabeth have been pursuing.

Just past the entrance is Jack Frost's Souvenirs. The kiosk's location is strategically placed right by the door so that visitors would be unable to miss out on an opportunity for souvenirs as the left the Village; another chance to score easy money for Fontaine. The jammed door requires a jolt of Shock Jockey to enter. Besides the tacky little mementos, the room also has a piece of Gear, the audio diary A Gift from Fontaine, and a safe containing a purse, absinthe, and some money.

The next section is Jack Frost’s Skate Rental, where customers acquired the special footwear needed for the rink. There’s some coins on the rental counter and a Lockpick in the back, but the most valuable item is what’s clutched in the frozen corpse's hand: the Carbine. Further on is Rapture on Ice; the marquee indicates the space is sponsored by Old Man Winter. The Frosty Splicer is heard barking orders from within.

Rapture on Ice is the centerpiece of the Village, an artificial ice skating rink located at the far end of the pavilion. It is here that Booker and Elizabeth face off against Frosty Splicers and recover the Old Man Winter Plasmid.

The split-level skating rink is decorated in an alpine theme, though the Frosty has added a surplus of ice. The lower level has the actual rink while the other parts have seating, a retail area, and a small showroom for Old Man Winter. The needed Plasmid is kept in a display case in the center walkway of the rink below a large statue of Jack Frost. There are about five enemies patrolling the skating rink, including the Frosty Splicer. The Pneumo Lines and split-level arena allow for a variable style of combat.

Booker can search for loot after the fray, but Elizabeth will insist on collecting the Drinkable Plasmid from the locked cabinet. Unfortunately, upon opening the case, the two find all of the bottles depleted. However, Elizabeth uses a special ability and makes a new bottle appear. When Booker questions how she pulled it off, she explains it as a new Plasmid: Tear.

Booker collects the Plasmid and they head out. There are three Splicers rummaging through the Skate Rental that Booker can take out or ignore. Booker presses Elizabeth for answers regarding her stake in this case, but she remains as enigmatic as ever. 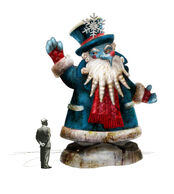 Concept art for the Jack Frost statue, by Robb Waters. 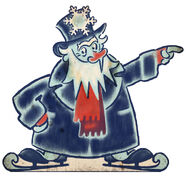 Someone needs to turn up the heating.

The counter is still lit up brightly.

Not much is left but death and disarray.

Jack Frost nipping at your nose.

At least there's not queue for Rapture on Ice.

The ice blocks what ever is left of the view from the ice rink.

Gaze at the power of Old Man Winter!