Mary-Catherine "Jasmine" Jolene[1] was an exotic dancer at Eve's Garden in Fort Frolic and was the erstwhile mistress of Andrew Ryan.

Career on the Surface[]

Before the construction of Rapture, Jolene was a chorus girl in Sander Cohen's Broadway musicals. Jolene wanted a lead role, but Cohen never showed any interest in her. Andrew Ryan noticed Jolene when he attended Cohen's productions, and he began to act as her patron, even paying for her to take elocution lessons to improve her prospects. Ryan invited Jasmine to come to Rapture, enticing her with the idea that she could perform in a new community with a foreign, resort-like setting.[2]

Within Rapture, Jasmine Jolene began working at Eve's Garden in Fort Frolic. With the salary granted to her by Sander Cohen, she was only able to afford housing in Artemis Suites. However, when she became Ryan's mistress he granted her a comfortable lifestyle and a luxurious apartment in Olympus Heights.[3]

In 1956 Jasmine became pregnant by Ryan. She was hesitant to tell him about this, so she asked her friend, Anna Culpepper, for advice. Culpepper advised Jasmine that she should try to become independent so that she wouldn't need to rely on Ryan's continued good will to support her. Frank Fontaine discovered this from the audio recordings of a surveillance device planted in Jolene's rooms.[4]

Using Brigid Tenenbaum as an intermediary, Fontaine offered to pay Jolene a large sum of money in exchange for the fetus of her unborn child,[5] which he planned to nurture to become his "ace in the hole" in his schemes against Ryan. Jasmine accepted the offer, seeing it as her only chance to gain financial independence. Jasmine didn't seem to know of Fontaine's involvement, but this mattered little to Ryan, who brutally murdered her after discovering the arrangement.[6][7]

When Jack explores Eve's Garden in Fort Frolic he sees several ghostly images of Jasmine Jolene. As he explores backstage he finds a locked door and sees the shadows of Andrew Ryan and Jasmine as she is pleading with him; a flashback to when she was murdered. When he enters the room, a flashback of Jack's "mother" appears in front of him for a brief second, as he finds Jasmine's corpse on the bed, with the possible murder weapon (a lead pipe), a man's hat, a smoking pipe, and some shoes still present at the scene. Bloody footprints from bare feet lead out the door and turn their way into the blocked up door of a 'Dames' restroom.

Jasmine Jolene is mentioned by Andrew Ryan in his audio diary Betrayal. Shortly after he dealt with her, Ryan recorded the account wherein he expresses his anger and devastation over Jolene's decision to sell the fertilized embryo. The only other reference to Jasmine is her iconic striptease poster, which can be seen in places like Siren Alley.

Jasmine Jolene's poster can be seen around various levels such as the multiplayer versions of the Kashmir Restaurant, Point Prometheus, and Fort Frolic.

Jasmine Jolene is mentioned in a conversation between a man and a woman on the upper floor of High Street. While talking about Andrew Ryan, the woman mentions how she used to see him all the time in Eve's Garden, but afterwards, he'd disappear with Jasmine, likely to go back stage for some more "intimate" entertainment.

Sander puts on a show. 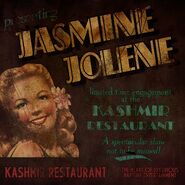 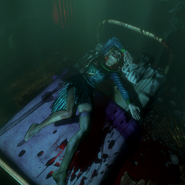