For the character in There's Something in the Sea, see Jeremiah Lynch.

Jeremiah Fink is one of the richest and most powerful men in Columbia. He is the founder, president, and principal 'inventor' of the Fink Manufacturing conglomerate. He is also the host of the annual Columbia Independence Day raffle event.

Jeremiah Fink is an unscrupulous businessman with a manufacturing monopoly within Columbia. Through his sponsorship of the work of others using persuasive monopolization, such as R.J. Pickwick's Sky-Hook invention, and his close support of Zachary Hale Comstock, Fink has become one of the wealthiest industrialists in Columbia. Fink became a powerful member of the Founders party, able to pay off the police and militia when needed. At some point, he became a father to a son.

On August 12, 1894, Fink became even more powerful when he learned of the Tears occurring throughout Columbia from his brother, Albert. Jeremiah was skeptical of the Tears until he realized the profits that could be produced when Albert made a fortune by plagiarizing the music emitted from the Tears and selling them as his own. Fink took the opportunity to obtain advanced technology and science observed through the Tears to expand his company's inventions. Many of the technologies Fink obtained came from the underwater city of Rapture, which existed in a different timeline. He briefly collaborated with Dr. Yi Suchong of Rapture, trading technology between Tears. Fink ordered "underwater expeditions" to Rapture's location, to obtain ADAM for Columbia's Vigors. Fink's and Suchong's collaboration created additional devices and technologies, such as the Big Daddies and the Songbird.

Fink was later approached by Comstock and hired to kill Robert and Rosalind Lutece by sabotaging the device they used to travel between realities. As a reward, following their elimination, Fink was given ownership of the Luteces' patents.[1] The Luteces did not cease to exist due to his interference but became capable of existing across multiple dimensions.

When Booker DeWitt first encounters Fink, he is hosting the 1912 Columbian Secession Day Raffle. During the Raffle, as Booker is to throw a baseball at an interracial couple on stage (or at Fink, depending on the player's choice), Fink and the Police notice the "AD" brand on Booker's hand and identify him as the prophesied "False Shepherd."

When Booker and Elizabeth travel to Finkton to get weapons for the Vox Populi, Fink is waiting for them, having already taken gunsmith Chen Lin to the Good Time Club for interrogation. Jeremiah offers Booker a job as head of his security and sends several waves of enemies to attack Booker as a way of "evaluating" his skills for the job. Booker rejects his offer, which angers Fink. Just before the start of the “test”, Fink mentions that he knows Booker had been a Pinkerton Agent at one time.

Through the use of Tears, Booker and Elizabeth travel to a reality where the Vox Populi have received large numbers of weapons and are revolting against Fink, resulting in a battle at his Factory. The Vox Populi overwhelm Fink Manufacturing, and Fink himself is cornered by Daisy Fitzroy. Booker and Elizabeth arrive in time to witness Fitzroy shooting Fink in the head, executing him in front of his own son. The child is then held hostage with Daisy fully intent on killing him. Booker and Elizabeth manage to save the boy and kill Daisy in the process. After being killed, Fink was scalped by the Vox Populi and the scalp was transported to the Port Prosperity Station, where it was nailed to a board with other Founder scalps.

Jeremiah Fink is mentioned by Yi Suchong in Burial at Sea - Episode 1. In Observation 33, Suchong mentions catching Fink in the act of stealing and turning his Plasmids into Vigors through Tears. Suchong decided in turn to use Fink's idea of adding an oxidizing agent to make ADAM products drinkable and presented it to Andrew Ryan and Rapture's society as an alternative for those who couldn't handle being injected with needles.

Fink returns in Burial at Sea - Episode 2, this time seen captured by Daisy Fitzroy. Fitzroy is seen talking to the Luteces about how she would pretend to threaten Fink's son, sacrificing herself to meet the ends of the Luteces. It is apparent from Fink's laboratories that he collaborated heavily with Yi Suchong, trading technology and ideas through Tears. Fink and Suchong both worked together to create the Big Daddies and the Songbird. After discovering how to achieve the bonding process between a child and their protector, Fink decided to cut ties with the Rapture doctor believing he could accomplish more working on his own than he could working with Suchong.[2]

When Elizabeth returns to the Tear in the Factory Docks after having retrieved a Hair Sample from deep within Fink's labs, she will find his corpse just as it was left in BioShock Infinite after he was shot by Fitzroy in cold blood.

Fink is akin to the typical turn-of-the-century capitalist: vain, greedy, cunning, and opportunistic. Owning nearly every successful business in Columbia, he is among the richest men in the city. He is also very manipulative, using exploitative business practices upon his employees' work hours and wages. Instead of paying his workers in Silver Eagles, he pays in Fink Tokens, only valid at the Fink Company store. As such, many of his workers are homeless and starving, living in a Shantytown below the main factory.

Fink himself is a very charismatic man, hosting the annual Raffle and is seemingly popular among the upper-class people. This extends only to supporters of the Founders; the Vox Populi and their supporters despise him and see him only as an exploitative, cruel slaver.

The Voxophone A Product Like Any Other reveals that Fink does not care for Comstock's prophecies, but more of how he can benefit from using said prophecies. He cares little for the well-being of his employees, so much that his own variation on Social Darwinism views industry as an organization similar to nature, made up of lions (leaders), cattle (workers), and hyenas (tricksters who only seek to "rile up the cattle"). Fink likewise labels himself and Booker as lions, his workers as cattle, and Daisy Fitzroy and the Vox Populi as hyenas.

The Private Quarters of Jeremiah Fink must be accessed in Episode 2 of the downloadable content Burial at Sea. Fink's living spaces reflect his obsessive-compulsive tendencies as well as a drinking problem. According to his Voxophone No Profit for the Prophets, Fink is an atheist, claiming he's seen more "evidence to the contrary than in support" of the existence of God. His relationship with Comstock could be explained as a simple deception to further his greed. It is also suggested that Comstock uses Fink for his production of goods and economic funding, which could be an explanation of why he would keep close ties to such a faithless person. The Voxophone Solution to Your Problems also suggests that Comstock is at least somewhat aware he is deceiving his followers and collaborates with Fink to further his own agenda. 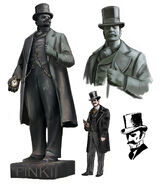 Words of encouragement from Fink.

"The Early Bird Catcheth The Worm."

An early version of the giant Fink statue.

Fink's leader card in BioShock Infinite: The Siege of Columbia.
Add an image to this gallery

Jeremiah Fink drawing a card at the Columbia 1912 Raffle.

The police show the brand to Fink.

Giant statue (made of either gold or brass) near Fink MFG Factory.

Fink's office, after the Vox Populi have breached the Factory.

Fink being murdered by Daisy Fitzroy.

Fink's scalp on the Emporia board.
Add an image to this gallery

Retrieved from "https://bioshock.fandom.com/wiki/Jeremiah_Fink?oldid=321198"
Community content is available under CC-BY-SA unless otherwise noted.