Jockey Splicers are a special type of Splicer that were set to appear in BioShock Infinite's downloadable content, Burial at Sea - Episode 2, but were removed from the final version of the game. These enemies were to have consumed large quantities of the drinkable Plasmid Shock Jockey, and in doing so had suffered severe deformities.

The Jockey Splicers are briefly mentioned by Booker DeWitt in Fontaine's Department Store.[1]

A cartoon version of the Jockey Splicer is briefly seen in the Need to Know Theater: "Message Received, Ryan!". 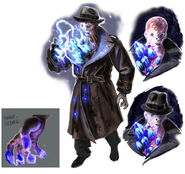 Other Concept Art of Jockey. 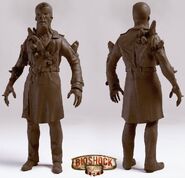 Untextured model of the Jockey.

Cartoon character for the Jockey Splicer.