Jorge Lacera is an artist and was the Lead Concept Artist for BioShock Infinite and Burial at Sea. He is the Associate Art Director for the upcoming BioShock game.

Jorge Lacera attended the Ringling College of Art and Design in Sarasota, Florida, USA, from 2000 to 2004[2] and graduated with the honor of ‘Best of Ringling’.[1] After graduating, Lacera worked as a visual development artist and IP creator at American Greetings in Cleveland, Ohio.[1] From 2009 to 2011, Lacera worked as a freelance artist for Wizards of the Coast and produced illustrations for the game Dungeons and Dragons.[2] In 2009, Lacera and his wife Megan founded the company Lacera Studios, which provides stories and illustrations for clients, such as Ghost Story Games, Disney, Hasbro, and Mattel.[2] In 2019, Jorge and Megan released their first children's book named Zombies Don't Eat Veggies![3]

In 2008 he was hired as a storyboard and concept artist for Irrational Games and provided art for BioShock Infinite,[2] like some of the storyboards for the BioShock Infinite Premiere Trailer.[4] In 2012, he was promoted to the Lead Concept Artist for BioShock Infinite and later Burial at Sea.[2] Lacera worked for Irrational until its closing in 2014 and provided art like the Industrial Revolution graphics, several propaganda posters like the George Washinton mural, Soldier's Field concept art, Columbia Citizen character art and Elizabeth's Burial at Sea attire.[4]

In October of 2019, Lacera was hired as the Associate Art Director for Cloud Chamber Studios and is currently working on the next BioShock installment.[2][5]

Was born in Columbia, South America and grew up in Miami, Florida.[6] Jorge Lacera met writer Megan Newcomer while working at American Greetings[1] and they were married on June 13th, 2009.[7] The two have a son named Kai.[6] 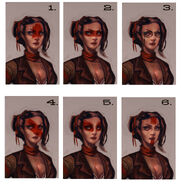 Elizabeth's Burial at Sea attire concept art.
Add an image to this gallery

Retrieved from "https://bioshock.fandom.com/wiki/Jorge_Lacera?oldid=321899"
Community content is available under CC-BY-SA unless otherwise noted.