This unnamed Kinetoscope was confiscated from the Graveyard Shift in Shantytown of Columbia and relocated to the Private Quarters of Jeremiah Fink in the Factory, which can be viewed during Burial at Sea - Episode 2. It is a message from Daisy Fitzroy along with various images depicting religions, put together as a crude piece of propaganda.

Transcript: As to the matter of religion, let me place myself in the camp of the agnostic. I pretend to understand the mysteries of the infinite no more than you, Comstock, or anyone else for that matter. But for the sake a' argument, let's say this is all one unhappy accident, and we all alone in our toils. Then who would Comstock use to control an' shame us with rules that apply only to those without a penny in their pocket? If there were no God, you could rest assured the first deed done by the first rich man would be inventin' him.

Location: In the "Leisure" room in the Private Quarters of Jeremiah Fink 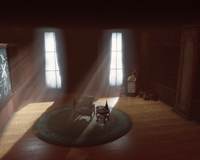