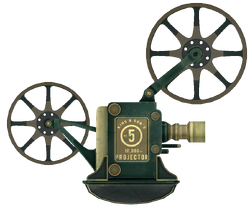 King & Son's is a business which produced projectors in both the floating city of Columbia and underwater utopia of Rapture, located in different universes, respectively. The company was owned by a Mr. King, who had released at least five different projector models with his son. The projectors encountered are the 5th model the company produced: a green and gold color scheme and capable of 10,000 candlepower (CP). The projector can be seen on tripods, on bases or connected to ceilings. The headquarters or a branch of the business is never encountered.

The Kings & Son's projector was used at the Fairgrounds during the festivities that took place during the 1912 Columbia Raffle and Fair, specifically in the Possession Stall. The projector can be turned on by Booker DeWitt, which shows the training video for the Vigor.

While imprisoned in Monument Tower, Elizabeth was heavily observed and studied by the scientists under the Columbia Science Authority. The scientists had various cameras filming her around the clock in the Specimen Observation area of the tower. The captured footage of Elizabeth was cut and produced into film, for the scientists to study. A screening room can be found in the lobby of the tower, with the King & Son's projector ready to be played. The projection showcased on the screen features Elizabeth attempting to pick the lock to the tower's exit in the library, investigating codes, painting, singing, and dancing.

In order to find Chen Lin and get his weapons to the Vox Populi, Booker DeWitt and Elizabeth must enter the Good Time Club, where Lin was taken to be interrogated. After leaving a disposal room in the basement, the duo will enter a screening room with a King & Son's projector. Turning it on will show a gruesome interrogation video of Chen Lin.

Entering through a Tear to a different universe, where Chen Lin wasn't killed in the basement of the club, they will walk past the same projector while leaving the area. This time, the projector shows the interrogation of Chen Lin, only to be interrupted by a man ordering to set him free under the orders of Head of Security Scofield Sansmark.

After unknowingly entering a Tear to 1983, Booker attempts to find Elizabeth in a decaying Comstock House. He enters the asylum's "Where We Learn" area, a learning facility for the patients on the third floor. The classroom he enters features a King & Son's projector, set up on a makeshift base, made from student desks stacked upon each other. The projector plays a film showing various images from Columbia, including citizens, Elizabeth, and Zachary Hale Comstock, along with messages and an equation. The video was likely used as brainwashing.

The Security Center on the same floor also features a King & Son's projector, placed on a desk connected to an electric panel. The film shows a continuous vague image of Elizabeth's face.

Elizabeth will encounter King & Son's projectors in both Rapture and Columbia, on her quest to save Sally from Atlas.

When Elizabeth enters the classroom in Ryan the Lion Preparatory Academy in Rapture, she is greeted to the voice of Andrew Ryan. This voice isn't coming from the man himself, but from a recording playing while a King & Son's projector shows a propaganda film. The film was intended for the children of Rapture, but was seemingly left on after the whole Department Store was turned into a prison. The film promotes Andrew Ryan's ideals, with the Ryan the Lion and Peter the Parasite cartoon characters.

While on her way to find the Hair Sample for Dr. Yi Suchong in Columbia, Elizabeth enters the Imprinting Studies, where she learns about Yi Suchong's and Jeremiah Fink's inter-dimensional collaboration, showing how they worked on the Big Daddies, Songbird, and their efforts to have them imprint on the Little Sisters and Elizabeth herself. Elizabeth finds a King & Son's projector, which shows a Bouncer Big Daddy filmed through a Tear.

Further in, Elizabeth finds a Songbird prototype, left to watch and respond to a projected film showing various Columbian images, from a King's & Son's projector wired to the ceiling.

After exiting an Air Vent, Elizabeth enters a dark screening room, with a King & Son's projector set in the center of the mostly empty area. Hitting play will show a projection of Elizabeth imprinting with the Songbird, via an act of empathy.

Retrieved from "https://bioshock.fandom.com/wiki/King_%26_Son%27s?oldid=308041"
Community content is available under CC-BY-SA unless otherwise noted.