“You can't cut off the power, comes right from the volcanic vents… Ryan always gets his juice. But I suppose you could drown the son of a bitch in it…”
― Kyburz[src]

Kyburz was an engineer working as Chief Supervisor at Hephaestus' power facility in Rapture.

Kyburz was a university-educated Australian electrical engineer who left for Rapture from the beach of Turtle Bay in 1947 with several other notable Australians. He initially looked up to Ryan a great deal, calling him "the best electrical engineer of our generation."[1] Kyburz rose to prominence in Rapture as the main Supervisor at the Hephaestus workshops, where his office was located.

However, due to Ryan’s ideals becoming more and more extreme, along with the increasing unrest and strain that was happening in Rapture, Kyburz decided to try to kill Andrew Ryan during the Civil War. However, he was stymied by Ryan's Splicer guards and an elaborate security device guarding Ryan's office suite. He then had a dream that gave him the idea to overload the energy core which provided power to Ryan's central command headquarters.[2] He devised a plan to assemble an Electromagnetic Pulse Bomb made of a bomb casing, Nitroglycerin, four R-34 Lead Shield Wire Stubs from the suits of Big Daddy corpses, and half a can of Ionic Gel.

As he worked on his device, Kyburz became increasingly paranoid. He turned Anya Andersdotter in to Ryan's men when he thought she was one of his spies.[3] Kyburz was killed before he could finish his device, which laid undiscovered in a crawlspace behind his work area until the events of BioShock.

Based on Kyburz' Audio Diaries spelling out the recipe for the device, Jack is given a mission in Hephaestus to assemble the components of his bomb and place it at Harmonic Core #3, thereby carrying out Kyburz' legacy. The corpse near Kyburz' device frame in the secret area of his workspace is suggested to be him, since it contains one of his Audio Diaries. 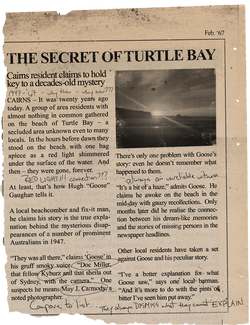 While searching for his daughter, Mark Meltzer comes across a February 1967 newspaper clipping that discusses the unexplained disappearances of Kyburz and other prominent Australians back in 1947. A local vagabond witnessed the embarkation as the expatriates met at a beach at Turtle Bay, boarded a submarine, and left, but few, if anyone, believed the man or his story.

A photo of Kyburz is briefly seen in the Need to Know Theater film "Taking the Taint Out of Fontaine", along with other members of the Rapture Central Council, revealing that he was part of it.