“Love the Prophet, because he loves the sinner. Love the sinner, because he is you. Without the sinner, what need is there for a redeemer? Without sin, what grace has forgiveness?”
― Lady Comstock[src]

Lady Annabelle Comstock (née Watson)[1] was the First Lady of Columbia and the wife of Zachary Hale Comstock. She was allegedly murdered by Daisy Fitzroy, and is remembered and revered by the citizens of Columbia, who have memorialized her image across the city. Even Fitzroy, who opposes the Founders, commends Lady Comstock's kind disposition.

Before becoming Lady Comstock, Annabelle Watson was simply a devotee of Comstock. In her life before Columbia, she selfishly took advantage of the numerous suitors who admired her. Comstock offered her redemption for her sins[4] and his hand in marriage. She took on the elevated position of First Lady of Columbia and spread Comstock's teachings to its citizenry, who deeply respected her. Lady Comstock also designed the Columbian flag and some devoted believers claimed that she sewed every single Columbian flag in existence.[5] Her audio logs affirm Lady Comstock's deep admiration and love for Zachary Comstock for forgiving her sins and giving her another chance.[4] However, she began to question her faith in her husband after seeing how cruel and unforgiving he could be to those who opposed him.[6]

Comstock, believing that he must father a child for Columbia to prosper after his death,[7] had Robert and Rosalind Lutece seek out his blood heir from an alternate universe, as their Tear-creating machine had rendered him sterile.[8] Lady Comstock quickly became suspicious of this child, Elizabeth, and accused Rosalind Lutece of being the mother. Rosalind denied the claim and explained the child's true origins, which Lady Comstock had trouble believing.[9][10]

Lady Comstock, confused and angered, decided she would need to break her silence about the child after two years of compliance.[11][9] Comstock had her killed presumably by way of strangulation before she was able to reveal the true nature of Elizabeth's birth, and framed their scullery maid Daisy Fitzroy for her murder.

The populace was devastated by the news of her assassination and sought to glorify her memory. Like a Catholic saint, her body was preserved in a memorial shrine while her belongings, such as her trademark blue dress, were treated like holy relics. Comstock, meanwhile, used this frame-up to galvanize his persecution of the Vox Populi.

Booker DeWitt occasionally encounters Zealots of the Lady, upper-class devotees of Lady Comstock, as enemies. They express their remorse over her untimely death through dialogue, as well as the coffins they chain to their backs.

“Elizabeth? Why is your mother a ghost?”
― Booker DeWitt[src]

During the events of BioShock Infinite, after arriving in Downtown Emporia, Booker and Elizabeth travel to the entrance of Comstock House and find that the gate is locked. Because Elizabeth is wearing Lady Comstock's dress, the gate's automatic security mistakes her for Lady Comstock. Elizabeth attempts to gain entrance using her fingerprints, but is rejected and decides that they will need to use Lady Comstock's own. The two set out to visit the tomb of Lady Comstock to "pay their respects" and take her hand. However, Comstock uses a miniature Siphon to hijack Elizabeth's powers and forcefully bring Lady Comstock back as the Siren: a cloaked, feral version of the woman that is neither dead nor alive, influenced by Elizabeth's resentment and fear of her. She immediately attacks, motivated by an intense hatred of Elizabeth and a rejection of the reality she has been thrust into. Over the course of a lengthy battle she resurrects the dead through Tears, bringing in alternate versions of nearby fallen enemies to attack Booker. Following her initial defeat, her ghostly footsteps lead Booker and Elizabeth through the streets of Emporia.

The Luteces tell the pair that they will need to seek out three Tears that contain truths that Comstock has destroyed. Seeking out the Tears reveals that Comstock, sterile due to exposure to the Lutece's contraption, had Elizabeth brought in through a Tear to serve his purposes. Incensed by this fraud, and further aggravated by her realization of the Prophet's atrocities, Lady Comstock suspected her husband of having an affair with Rosalind Lutece. As revealed in the other two Tears, in order to maintain the myth of the Miracle Child, Comstock had Jeremiah Fink murder both her and the Luteces. Over the course of this discovery Booker and Elizabeth are once more beset by the Siren.

Once the truths of all three Tears are discovered, Elizabeth initially attempts to make amends with Lady Comstock. The latter, however, rejects her apology, and attacks Booker once more. Once she is subdued, Elizabeth manages to make peace with her, showing her the truth behind her death and resurrection. Freed of her bitterness, Lady Comstock blasts open the gate to Comstock House as an act of kindness.

An alternate version of Lady Comstock was Annabelle DeWitt, mother of Elizabeth/Anna and wife of Booker DeWitt. Little is known of her other than Booker making the claim that she died in childbirth. It can be assumed that her life before meeting Booker DeWitt and marrying him was very similar to that of Lady Comstock's before her meeting Zachary Hale Comstock.[12][13]

Lady Comstock's crypt in the cemetery.

A painting of Lady Comstock.

A statue of Lady Comstock holding baby Elizabeth in the First Lady's Memorial. 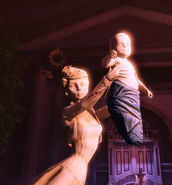 Close up of Lady Comstock's statue.

Lady Comstock pictured on the side of The First Lady, her airship.

With Father Comstock and Baby Elizabeth.

A vandalized painting of Lady Comstock in the Art Gallery in Downtown Emporia.

Texture on the back of the coffin each Zealot of the Lady carries.

Portraits of Lady A. Comstock (The one on the right was not used).

Sculpt of Lady A. Comstock.

The in-game model of the glass coffin.