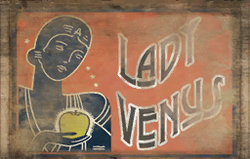 Lady Venus Brand is a produce company found in the Farmer's Market of Rapture, which sold fruit such as apples. Its produce is shipped in crates that depict an art deco flapper girl with a letter "A" on her hat holding a golden apple. The ad is based on a fruit crate label for Hesperian Fruits.

Retrieved from "https://bioshock.fandom.com/wiki/Lady_Venus_Brand?oldid=320493"
Community content is available under CC-BY-SA unless otherwise noted.