Transcript: Lamb's followers are blinded by her promises, but it's clear that this "religion" she's cooked up is an elaborate front for some insane science experiment. She's twisting these girls into… into slaves, bringing ADAM back to Lamb's science facility, "Fontaine Futuristics." I've got to find it… I've heard the splicers mumbling that Alexander is the ferryman…

Location: On a crate in the smuggler's hideout in Plaza Hedone. 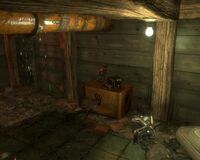 Retrieved from "https://bioshock.fandom.com/wiki/Lamb%27s_Operation?oldid=283826"
Community content is available under CC-BY-SA unless otherwise noted.