“The Lancer is the most technologically advanced Big Daddy that Rapture ever produced.”
― Charles Milton Porter[src]

The Lancer is one of the five functional Big Daddy, introduced in the Minerva's Den downloadable content for BioShock 2. Its main weapon is the Ion Laser, and it can use an Ion Flash Attack to blind opponents. According to The Thinker, the Lancer is the most technologically advanced Big Daddy in Rapture.

Lancers have a much more stylized appearance than their brethren, their armor resembling a cross between Art Deco (the helmet is designed to resemble a Rapturian skyscraper) and the knights of the Middle Ages. Lancers have a cape attached to their upper torso, and save for a few clusters of barnacles their armor is in near-pristine condition. A gyroscope-like object serves as the valve on their oxygen tank, rather than the typical metal wheel.

The Lancer, like its more rustic counterparts, has three "moods" that may occur when the player encounters them. These moods appear as the color of the portholes on the Lancer's helmet.

The Lancer has three types of attack:

Both the Power to the People stations and the research system are absent in Minerva's Den, resulting in a decrease in the player's damage output. Therefore, many weapons and ammunition are either inefficient or unsuitable to fight against Lancers. It is also very tough, if not impossible, to defeat a Lancer with only a single type of ammunition. Thus, it is suggested to combine different weapons and ammunition together in order to pin a Lancer down. 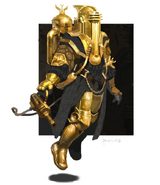 Concept art for a Deco Big Daddy, seen from the "perspective" of Little Sisters.

The Deco Big Daddy, as seen in Outer Persephone. 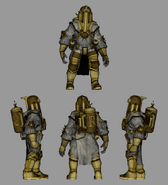 A multiple view of a Deco Big Daddy.

Concept Art for the Deco Big Daddy which would become the Lancer. 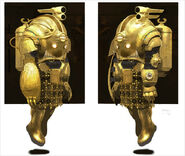 Concept for the Lancer, remade from the Deco Big Daddy, as seen in Minerva's Den.

A Lancer preparing to use its Ion Flash attack.