“Ryan's woman in Arcadia is an old betty named Langford. An okay sort, but not above doing a dirty job for a dollar.”
― Atlas[src]

Langford Research Laboratories or Langford Labs is a botanical research center owned by Julie Langford under supervision of Ryan Industries. The lab is located in Rolling Hills of Arcadia, and contained the main administrative office and observation point of the gardens.

Life in Rapture would not be possible without Arcadia and the oxygen-producing trees and plants that grew therein, and Arcadia itself would not exist were it not for the work of the scientists at Langford Research Laboratories. The most important of these scientists was Professor Julie Langford, Ph.D. Rapture's founder Andrew Ryan charged Langford with the task of "[building] a forest at the bottom of the ocean"[1] and then put her in charge of managing the botanical garden, monitoring oxygen production for the city, and overseeing all scientific breakthroughs. The latter included the study of ADAM and genetically-engineered plant life.

Jack journeys through Arcadia in search of a Bathysphere. When he reaches the Lower Rolling Hills, he sees both the entrance to the research laboratory and the district's Rapture Metro station. The lab has a small exterior section with the usual gardening supplies, an El Ammo Bandito vending machine, and a pathway to another part of the labs that is blocked off by debris. The whole area is guarded by a Security Camera. Beyond that is a glass tunnel which leads to the building holding the laboratory proper. If Jack deviates to check out the area, Langford appears on the monitors above the door and, mistaking him for a Splicer, shoos him away.

When Jack moves towards the metro station, Andrew Ryan releases a fast-acting and powerful herbicide throughout Arcadia. It withers the trees and immediately impacts the oxygen levels triggering a lockdown. Atlas suggests Jack consult with Langford for a method to remedy the situation before he asphyxiates. When he arrives at the front door, Langford, still processing the crisis, momentarily questions if Jack is to blame before realizing that only Ryan had the resources. She sends Jack to retrieve a bud of Rosa gallica so she can test a hypothesis.

After his trip to the Waterfall Grotto, Jack sends the rose up to Langford via the Pneumo Tube. With the needed test sample, her experiment seems to be a success and Langford invites Jack in to discuss how to revive the forest.

Jack enters the lab complex and finds himself at the security check-in area. The Gene Tonic Hacking Expert is on the desk, a flask of Chlorophyll Solution is on the filing cabinets, and the Audio Diary What Won't They Steal is on the floor. As Jack passes the Bot Shutdown Panel, he enters the split-level lab and it becomes apparent how Langford managed to survive the fallout of the Rapture Civil War. The facility has an impressive array of Security Devices though Langford assures Jack they're harmless as he ventures in. The entry area has desks and tables set up for the study of plant samples, a bookshelf full of scientific journals and research texts, and a row of incubators by the window. A Machine Gun Turret keeps watch in front of a sealed doorway, there's a Health Station next to a table, and the audio diary Teaching an Old Hound by a microscope.

More elaborate experiments were carried out in the next section over. The middle part has a mature tree growing in an isolated glass chamber, two more incubators, a Gene Bank, a potting station, and another sealed doorway. A Security Camera and another Machine Gun Turret monitor the space. A wide set of windows illuminates the area below; it's flooded but it has a useful Circus of Values and a U-Invent. Further up is a level with two more incubators, a Vita-Chamber, and a bulkhead that leads up to the administrative office. A Big Daddy lumbers between the two Little Sister Vents in the area, and his Little Sister can gather from two corpses around the lab.

Jack heads upstairs through another glass tunnel. When he approaches Langford's office, she's examining a flask of chemicals; the door suddenly locks. Over the PA System, Andrew Ryan cooly, sadistically accuses her of infringing on his copyright of the production and distribution of the Lazarus Vector. As he reads their business contract, toxic gas fills the room and Langford begs for mercy. In her final seconds of consciousness, she scrawls the code to her locked wall-safe upon the window, thereby giving Jack access to the list of resources needed to construct the Lazarus Vector and restore Arcadia. Langford's private lab contains a research table, pair of incubators, shelves of books, the Chemical Thrower, and the central misting control console.

With Langford dead, the security system turns hostile. In fact, when Jack heads back down, a pair of Leadhead Splicers have already entered the facility. After he deals with them, a Saturnine cultist teleports in.

Jack returns from the Farmer's Market to the labs to deposit the Lazarus Vector into the central mister. As he walks into Langford's office, he finds a Leadhead Splicer searching the body of a Houdini Splicer. Jack deposits the canister into the console, but it takes a moment to funnel the formula throughout Arcadia's pipes and vents.

While it processes Andrew Ryan radios in a threat and sends a battalion of Splicers to deal with Jack. As he heads to the lab entrance to fortify the front gate, a pair of Thuggish Splicers cut through the two sealed bulkheads with torches. Jack manages to activate the Lab Access Seal just in time as a mob of Splicers come charging at the door. While they attempt to cut through, Atlas sends some armaments (six proximity mines, ninety-seven Dollars, and a Automatic Hack Tool) via the Pneumo Tube. It's all for not though as they breach the lab. What follows is a barrage of Splicers in three waves.

The first round consists of the trio who cut through the entrance, a Houdini Saturnine, three Thuggish, and a Leadhead. Next comes a Thuggish, a Leadhead, another Thuggish, two more Leadheads, and a final pair of Thuggish. The final volley starts off with a Thuggish and two Leadheads all at the same time followed by five Thuggish and then a Houdini. After the long fight, a bell rings announcing that the formula is ready to be dispersed. A restorative mist flows through Arcadia's venting system and the green is brought back to the garden. With the lockdown ended, Jack can finally leave Arcadia.

Langford's laboratories also appear in the multiplayer version of Arcadia. Located in the northernmost part of the map, this version of the Laboratories houses little more than a few incubators and bookshelves. A glass container holding a small tree in the center of the room will fill with green gas anytime a player approaches it. Approaching the incubators can cause them to light up with green gas revealing ferns within, but one incubator is broken and will only spark and fill with smoke.

The laboratories can be accessed through two "Employees Only" doors in Arcadia Glens or by taking a stairway up from the flooded lower walkway.

A blocked path to part of the labs.

Inside the security checkpoint. 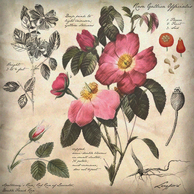 An illustration of the Rosa Gallica Officialis, by Julie Langford. 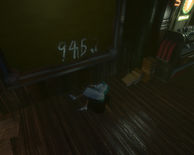 Deploying the Vector in the Misting Machine.