“Like a lot of the ladies down here, Siren Alley was born with a more respectable name… but only God remembers what it was.”
― Augustus Sinclair[src]

Little Eden Plaza is a two-story shopping and residential area in the northern part of Siren Alley. It used to be a place for builders and architects to showcase their work and design, but now it has been reduced to Rapture's brothel, along with the people behind the counter. It has access points to The Pink Pearl and Plaza Hedone.

Little Eden Plaza of the Mason's Quarter used to be the supreme place for builders and architects to demonstrate their craft, thus attracting people like Daniel and Simon Wales. With its Art Deco design and airy, New Orleans-inspired balconies, the locale was once quite beautiful. However, when the Rapture Civil War broke out, most, if not all, construction work was stopped and attention was focused on the war. As the conflict escalated, life became increasingly desperate for the denizens. With few options, they turned from the business of architecture to the world's oldest profession.

Little Eden Plaza fell from grace along with its inhabitants. Soon the whole area became a sleazy district in a state of disrepair. As Sofia Lamb returned to prominence in Rapture, Simon Wales began to preach her collectivist philosophy to the despondent Siren Alley citizens. Soon, Little Eden Plaza was adorned with all sorts of religious shrines and iconography.

When Subject Delta is detoured from by Simon Wales, he enters Little Eden Plaza by means of the airlock. Before he has time to dry off, he witnesses a trio of angry Splicers duke it out with a Big Daddy. The one-sided brawl ends with an abrupt display of the Rumbler's strength and long-range weaponry. When all quiets down, Delta can explore the area better. A group of Splicers walk the lower area and upper walkways around the locked off Pink Pearl.

As Delta heads south, he'll come to the door to the Maintenance Area where the hideously deformed Simon Wales is lighting prayer candles at a shrine next to the passage. Before he can be properly dealt with, the mad cleric darts away to Pumping Station 5.

When Delta returns from the Maintenance area, he heads to the Pink Pearl to learn the combination for the door to Plaza Hedone. A Brute Splicer beats on the security gate to the brothel before opening it, but quickly attacks Delta upon noticing him.

After obtaining the code and returning to Little Eden, Delta is again attacked by a Brute outside the hotel. Other Splicers are located back near the entrance to the Maintenance Area.

The Mermaid Lounge is for the most part still intact, although not in very good shape. The main lounge contains an upright piano, seating and a jukebox. The jukebox plays the songs Bei Mir Bist Du Schön by the Andrews Sisters and Need A Little Sugar in my Bowl by Bessie Smith. In the back area, there's a playable grand piano. On the second floor there's a kitchen and a casino. The casino contains 10 Slot Machines and 2 tables for playing cards, one of them still with a deck of cards on them. When Subject Delta first enters the casino, there's two Splicers accusing each other of cheating. Hidden behind two posters of Jasmine Jolene are two Machine Gun Turrets. The toilets of the Mermaid Lounge are long frozen over.

Across from the Mermaid Lounge is a small bar and store called the Poisoned Apple. A row of bar stools wrap around a counter outside of the front where patrons would be served drinks. In the back of the facility is a storage room with two large refrigerators. A shop adjacent to the eatery is a part of the Poisoned Apple. The entrance to bar is inaccessible when first arriving in Siren Alley, but can be accessible through a hole on the floor in the apartment above.

Tucked into the corner of Little Eden Plaza, the Oceanview Pharmacy was one, if not the main, drugstore in Siren Alley. By the time Subject Delta enters Siren Alley, the pharmacy has been completely locked up, possibly out of business for some time.

There were several shops on the second floor, but all have closed. The only space still accessible has been converted into a three room apartment consisting of a bedroom, kitchen/living room, and moonshine distillery. The bedroom has a gaping hole in the floor that leads to the Poisoned Apple's kitchen.

Another view of the pre-launch plaza.

There are several shrines to Jack throughout. 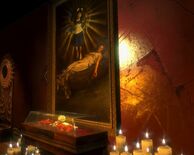