For the vents used mainly for ventilation, see Air Vent.

Throughout Rapture, there are numerous holes in the wall surrounded by metallic decoration. These vents allow Little Sisters access to all areas of the city so they can collect valuable ADAM from corpses. The Little Sisters are the only thing small enough to fit into these vents and crawl through them, therefore they can use them as a means to safely move around the city without a Big Daddy.

The art deco stylized leaves and plant stems motif designed on the metallic plate insinuates that the vents may all lead — possibly through a pumping system — to Arcadia, transporting oxygen and carbon dioxide to and from them. Some areas of Rapture contain vents that are in disrepair with water flowing over or out of them. The Little Sisters were conditioned to use these vents by educational posters in the Little Wonders Educational Facility in Point Prometheus. However, the names of the vents were simplified to seem more innocent and friendly, as they are nicknamed 'Hidey-Holes'.

At first, the vents provided an easy means for the Sisters to seek out and access corpses. However, as ADAM addiction and violence intensified throughout the city, desperate drug addicts abandoned any compunction about targeting the girls. The vents were still good for navigating the city, but an escort would be needed from then on.

Big Daddies are always awake and vigilant. When they do not have a Little Sister with them, they roam to the nearest vent and pound on its rim. The noise summons a Little Sister out. When the Little Sister is tired or finished with gathering ADAM, she goes back to the vent and the Big Daddy usually helps her up into it.

If the player uses Hypnotize Big Daddy or saves a Little Sister after taking down a Big Daddy, she will scurry back to the nearest vent and crawl away. On levels where Jack has already rescued or harvested every Little Sister, lone Big Daddies roam around and continue to pound on the vents, but no Little Sister comes out. They will show physical signs of aggravation and disappointment, then trudge in vain to the next vent.

In BioShock 2, vents are one of the only locations that Subject Delta can directly interact with an adopted Little Sister. After approaching and interacting with a vent, the player is given the option to harvest or save the Little Sister. If she is saved, the girl will thank Delta for his kindness, climb up into the vent, and disappear.

Throughout Rapture, there are many vents that have been decorated as shrines by the Rapture Family. At these locations, the Splicers hold services and offer themselves up to the Little Sisters to have their ADAM harvested. Other vents have been decorated by the Little Sisters with crayon drawings. The vents in Dionysus Park, like the one seen to the left, are rusted and covered in barnacles, muck, and starfish.

Usually three vents can be found in every multiplayer map for BioShock 2. The vents are only in use during matches of Capture the Sister, where they are called Gatherer Vents. In this "capture the flag" variation, the players are divided into two teams that take turns capturing the Little Sister from the other team, and returning her safely into an active vent, while the other team tries to stop them.

In the first episode of Burial at Sea, heating vents take on a similar role to the Little Sister vents. The first of these is seen outside the Little Wonders Educational Facility on Market Street. They are gold painted, designed to resemble a flame, and feature a closable grate over the hole.

After traveling to the Housewares department of Fontaine's Department Store, which is now a prison, to find the missing girl Sally, Booker DeWitt and Elizabeth see the girl fleeing from a Splicer and crawling into a vent for protection. Elizabeth figures out how to get Sally to them: closing the vents found throughout the department and turning up the heat will force her to come out from one particular vent; the last one to be closed. Unfortunately, Booker and Elizabeth are not the only ones seeking Sally out. In Electronics, Customer Service, and the Bookstore, Splicers attempt to lure Sally out using toys, treats, and tricks, respectively.

There's a total of seven vents:

Following the end of Episode 1, Elizabeth finds herself in a dream-like "Paris", which quickly turns into a nightmare after meeting Sally. Chasing the young girl leads to DeWitt Investigations, where Elizabeth's conscience takes a toll on her: she is haunted by the memory of her leaving Sally to die in the hot vent, and becomes surrounded by several screaming Sallys trapped in the closed vents. Elizabeth then wakes up where the previous episode ended, by the vent in the Toys department, where she finds Atlas and his men pulling Sally out of the heated vent and preparing to kill her, but she manages to work out a deal: engineer a prison break for Atlas in exchange for both Sally's and her own life.

Concept art for the Little Sister entering a vent. 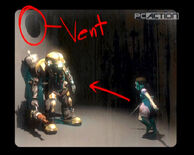 Need help getting into the vent. 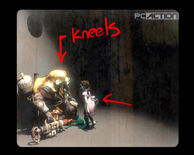 Big Daddy kneels to help her in the vent. 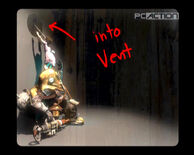 Climbs on his shoulders into the vent. 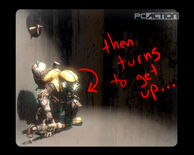 Gets in the vent and Big Daddy turns to leave.

A vent shrine decorated by The Rapture Family.

A blueprint of the vent system in Episode One of Burial at Sea.

"I'm sorry… I never should have left you there."
Add an image to this gallery 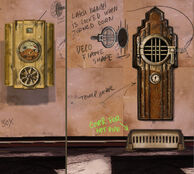 The finished models as displayed in-game.
Add an image to this gallery

Retrieved from "https://bioshock.fandom.com/wiki/Little_Sister_Vent?oldid=318767"
Community content is available under CC-BY-SA unless otherwise noted.