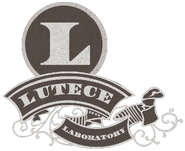 The Lutece Labs is the laboratory and home of Robert and Rosalind Lutece located in the Market District of Downtown Emporia. One of the three Tears needed to reveal the truth about Lady Comstock and the Luteces is located here.

Rosalind Lutece is a quantum physicist who established the Lutece Labs as her home and place of business. The front of the building functions as a lobby and library—when Booker and Elizabeth visit the location in 1912, the area is in a state of disrepair, with the bookshelves mostly bare.

Rosalind had the back of the building, specifically the lower laboratory area and upper bedroom, partially dismantled in order to create the massive Lutece Device: a machine capable of opening Tears into alternate realities. She had beforehand, through experimentation of her Lutece field, discovered the existence of alternate universes and an alternate version of herself, Robert Lutece. By manipulation of a pair of quantum-entangled atoms, they were able to communicate with each other with Morse Code and construct this machine, after which Rosalind was able to open a Tear into Robert's reality and bring him through to her own.

The Luteces were ultimately "killed" at Comstock's orders by Jeremiah Fink, who sabotaged the contraption while they were using it. However, instead of actually killing them, the sabotage scattered the Luteces across space and time, rendering them practically immortal masters of trans-dimensional travel.

Booker and Elizabeth follow Lady Comstock's ghostly footprints into the Lutece Labs to discover one of three Tears which help reveal the truth about what happened to her, along with the Luteces. Through the Tear, Lady Comstock is heard accusing Rosalind of having an affair with Comstock that resulted in Elizabeth's birth. Rosalind tries to tell Lady Comstock the truth: by revealing that Elizabeth was a "product of their little contraption." Lady Comstock, however, does not believe her and instead demands the child be taken out of her house. Elizabeth's hatred of Lady Comstock is further kindled by this truth and she coldly utters that "she [Lady Comstock] deserved whatever Comstock did to her."

In the Clash in the Clouds DLC, Lutece Labs can be visited after buying the models of Rosalind and Robert Lutece in The Columbian Archeological Society. This will unlock a tear, which upon opening allows entrance into Lutece Labs, where five new Voxophones can be found.

The reception area of the labs.

Only One Obstacle
Deutsch
Community content is available under CC-BY-SA unless otherwise noted.
Advertisement