For the Machine Gun in BioShock and BioShock 2, see Machine Gun (Rapture).
“Rain a hail of bullets upon your foes with the TRIPLE R!”
― Fink Manufacturing advertisement

Rolston's Reciprocating Repeater, commonly referred to as the Triple R, and known in-game as both the Machine Gun and the Repeater, is a rapid-fire submachine gun, part of the arsenal of BioShock Infinite. Both variants are available and usable by Booker DeWitt in-game and are amongst the most commonly available weapons.

The Machine Gun is the basic version of the weapon, used mainly by the Columbia Military. It is incredibly common throughout the game, serving as a standard-issue weapon for Columbian soldiers and security forces, as well as finding use in the Vox Populi. It is the second firearm available to Booker, found shortly after the Raffle upon a crate on the rooftops of Comstock Center. It is a very versatile weapon, remaining reasonably accurate when fired in bursts while dealing rapid damage in close-quarters when fired fully automatically. Also featuring clear iron sights and a relatively short reload time, as well as commonly available ammunition, the Machine Gun can serve as a jack-of-all-trades primary weapon throughout the game.

However, the Machine Gun's versatility is hindered by its low damage per shot, amongst the lowest of all available weapons in the game without upgrades. This means that sustained fire is required to deal significant damage against tougher enemies, which is difficult to maintain against enemies such as Zealots of the Lady, who will likely teleport away before any serious injury can be inflicted. The weapon also suffers from considerable recoil, meaning that the weapon loses effectiveness at longer ranges, and can even suffer at mid-range due to its aforementioned low damage per shot.

To use the Machine Gun most effectively, it is advised to empty ammunition into less powerful hordes of enemies, taking advantage of the abundance of ammunition available, and the speed at which the weapon can deal damage. It is also arguably effective against larger enemies if the player doesn't have a more powerful weapon at hand, as Firemen and Handymen tend to make easy targets, especially if stunned with Shock Jockey beforehand, allowing the player to deal a lot of damage without worrying about recoil. That said, it is advised to carry a more damaging weapon if using a Machine Gun, such as a Shotgun or Carbine depending on the environment, to allow the player to deal heavier damage against tougher foes at specific ranges.

The Machine Gun can hold up to 35 rounds in a magazine, plus 105 spare rounds.

If the player has purchased the Season Pass and has access to the Ammo Advantage Gear, the Machine Gun can have the largest clip size of any weapon in the game, greater even than the Peppermill Crank Gun. The Ammo Advantage Gear will increase the base clip size to 61 rounds. Taking the Increase Clip upgrade will double this amount, giving the player 122 rounds per magazine. It should be noted, however, that this huge clip size will leave the player with very little ammo in reserve after reloading.

This variation of the Triple R, known as the Vox Repeater (not to be confused with the 1860 Henry Repeater), is used exclusively by the Vox Populi. It is distinct from its Founder counterpart by its extended round drum magazine, altered front sight, and the distinctive red tape around the whole gun. It is first available after opening the Tear in the Good Time Club, lying upon several confiscated weapon crates, although ammunition for the weapon can be found before this point. It can be found reasonably often in the hands of Vox soldiers. It is similar to the Machine Gun as it fills the role of a fully automatic weapon, remaining similarly versatile. However, the Repeater boasts considerably higher damage per shot, as well as greater accuracy when fired fully automatically. This allows it to remain useful at much longer ranges than the standard Machine Gun and can be used as a decent marksman weapon when fired in bursts.

However, this is offset by the Repeater's much slower rate of fire, hindering its utility in close quarters where the Machine Gun is much more useful. Indeed, the smaller magazine also reduces the number of shots that can be fired before reloading, although the lower rate of fire largely offsets this disadvantage. This also means that the Repeater also has a much lower overall ammunition capacity, as well as somewhat rarer ammunition. Thus, the weapon cannot be "sprayed-and-prayed" as the Machine Gun can, requiring more accurate and controlled fire.

The Repeater is arguably less useful against common enemies than the Machine Gun, but is nonetheless more effective in fighting hordes than other more powerful single-shot weapons, and it is recommended that the player still engages larger groups of enemies with the Repeater, only at longer ranges. The improved accuracy of the weapon means it can be used against heavier enemies at range, and although it is less accurate and deals less critical damage than the Carbine or Burstgun, it can still kill quite quickly if the player aims for headshots, or the heart of a Handyman, especially if enemies are first stunned by a Vigor.

The Repeater can hold up to 20 rounds in a magazine, plus 60 rounds in reserve. The Ammo Advantage Gear will increase the base clip size to 35 rounds. Taking the Clip Size upgrade will double this amount, giving the player 70 rounds per magazine.

Concept art for a Machine Gun.

A clean render of the Triple R. Notice "1873" on the magazine housing. 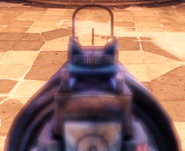 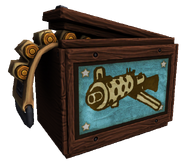 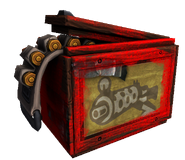 The Golden Machine Gun received with the Season Pass.

An advertisement for the weapon, seen on signs throughout Columbia.