BioShock Wiki
Register
Don't have an account?
Sign In
Advertisement
in: Quotes without a source, BioShock Weapons, BioShock 2 Weapons,
and 2 more

The Machine Gun is the second ranged weapon obtained in BioShock, and can be first located in Emergency Access in the Medical Pavilion. It fires a rapid spray of Auto Rounds, each doing a moderate amount of damage, and comes with two variants for organic and armored enemies. Its main weaknesses are heavy recoil and low accuracy. Its main advantages are large ammo capacity and higher damage-per-second, ignoring headshot bonuses and better specialty ammo enjoyed by the Pistol and Crossbow. The damage can be increased and the recoil reduced with upgrades at a Power to the People station, increasing the Machine Gun's effectiveness. There is no hit location damage bonus when using this weapon; bullets do the same amount of damage no matter where the target is hit.

A Machine Gun with the increased damage upgrade.

A Machine Gun with the decreased kickback upgrade.

The Machine Gun is the fourth weapon acquired by Subject Delta in BioShock 2, and is first picked up in Ryan Amusements. It is based on a Gatling Gun instead of a Thompson submachine gun and fires .50 Caliber rounds with anti-personnel and armor-piercing variants. It is best used to sweep an area of Splicers but has increasing recoil with continuous bursts. It can also be used as a melee weapon to be swung at enemies, doing moderate damage.

This upgrade adds tempered, heavy-gauge steel barrels and a re-enforcing pin to the Machine Gun, which increases the damage of the ammunition fired.

A stabilization cylinder reduces the kickback of the Machine Gun, resulting in more accurate fire.

A flash suppression vent is added to the end of the Machine Gun, directing propellant gas upwards which counteracts the gun's kickback.

A high density electrical field prevents shots from breaking up on first impact, causing them to ricochet.

This upgrade adds a magnetic coil assembly to the Machine Gun, causing the bullets fired to ricochet once off of any solid surface they hit. Note that enemies do not cause bullets to ricochet.

The Machine Gun is a powerful and easy-to-use weapon, effective both against small groups and single tough enemies. On the other hand, the player has to be careful not to run out of ammunition, and the weapon's final upgrade is next to useless. Although recommended for less experienced players and those willing to have a strong anti-group tool, it is strongly advised to not pick the Ricochet Enhancement upgrade, and instead use the Power to the People station to craft a more useful enhancement.

The Machine Gun as found in Ryan Amusements.

The Machine Gun in BioShock 2.

The Machine Gun in BioShock 2 Multiplayer is a fast-firing long-range weapon unlocked at Rank 2. This weapon is better used against multiple enemies or at close range, and increases recoil with continuous bursts.

The Machine Gun with the Firing Boost upgrade.

The Machine Gun with the Magazine Size upgrade.

The Machine Gun with the Kickback Reduction upgrade.

Booker DeWitt
Leadhead Splicers
In BioShock Infinite's downloadable content, Burial at Sea - Episode 1, the Tommy Gun can be found as a replacement of the main game's Machine Gun. However, as with the rest of the weapons featured in this DLC, the ammo capacity and availability is limited. It has a maximum of 2 spare clips, 35 bullets each, so the gun must be used sparingly whenever possible to conserve ammo. It is first found at The Daily Bread restaurant in Fontaine's Department Store.

The Tommy Gun in Burial at Sea - Episode 1.

A Splicer firing the Tommy Gun. 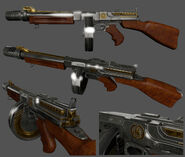