“I loved those stories when I was a kid!… They are, they are a bit off-putting.”
― Elizabeth[src]

Main Street is the boardwalk connecting all attractions of Soldier's Field in Columbia.

Zachary Hale Comstock knew that the best way to win people's allegiance was to indoctrinate them while they were young. It was with this idea that he built Soldier's Field: a carnival of delights in which thinly-veiled Nationalism was spread through games, rides, and history lessons. The many landmarks that made up the area were too large to all be housed on a single floating island. Instead, Main Street served as the central backbone for the amusement park connecting all the largest attractions.

The area acts as a hub for Battleship Bay and the Arcade via the Soldier's Field Welcome Center. The Hall of Heroes can be accessed via the Patriot's Pavilion. The First Lady's Aerodrome has a docking station here with a Gondola to the Ferris Wheel in the distance. As for more immediate services and entertainment, citizens can visit the Dimwit & Duke Ice Cream Shoppe, Hotel Soldiers Field, Founders Books, and Toy Soldiers. In addition, it also has a carousel, a souvenir shop where a vendor sells Songbird plush dolls and other toys, and a performance stage featuring Duke and Dimwit.

Booker DeWitt and Elizabeth arrive at Main Street during the twilight hours of July 6, 1912. Upon their first visit, the place is filled with revelers. Most of the residents are either ignorant of the shocking events that occurred earlier that day at Raffle Square and Monument Tower, putting on a brave face for the unaware children, or trying to distract themselves with a diversion.

They make it over to the Gondola for the First Lady's Aerodrome, but find that they need a unit of Shock Jockey in order to operate the vehicle. They head over to Patriot's Pavilion to retrieve the Vigor from the Hall of Heroes. When the pair return later, all the fairgoers have left.

An early version of Main Street, used as a base for Earnest Eagle concept art by Jorge Lacera (note the First Lady's Aerodrome in the back).

The model for the unused blue tower building on the right in the pre-launch image, by Darren Hatton.

The unused building on the left in the pre-launch image, nicknamed Hotel of Europe, by Chad King. 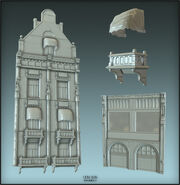 Hotel of Europe model renders.
Add an image to this gallery

Entertainment for the children.

An actor takes a break.

The Cotton Candy vendor.
Add an image to this gallery

Retrieved from "https://bioshock.fandom.com/wiki/Main_Street?oldid=321889"
Community content is available under CC-BY-SA unless otherwise noted.