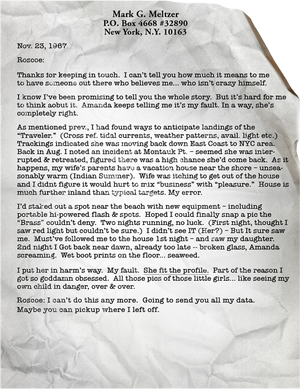 Thanks for keeping in touch. I can't tell you how much it means to me
to have someone out there who believes me... who isn't crazy himself.

I know I've been promising to tell you the whole story. But it's hard for me
to think about it. Amanda keeps telling me it's my fault. In a way, she's
completely right.

As mentioned prev. I had found ways to anticipate landings of the
"Traveler". (Cross ref. tidal currents, weather, avail light etc.)
Trackings indicated she was moving back down East Coast to NYC area.
Back in Aug. I noted an incident at Montauk Pt. - seemed she was inter-
rupted & retreated, figured there was a high chance she'd come back. As it
happens, my wife's parents have a vacation house near the shore - unsea-
sonably warm (Indian Summer). Wife was itching to get out of the house
and I didn't figure it would hurt to mix "business" with "pleasure". House is
much farther than typical targets. My error.

I'd staked out a spot near the bench with new equipment - including
portable hi-powered flash & spots. Hoped I could finally snap a pic the
"Brass" couldn't deny. Two nights running, no luck. (First night, thought I
saw red light but couldn't be sure.) I didn't see IT (Her?) - But it sure saw
me. Must've followed me to the house 1st night - and saw my daughter.
2nd night I Got back near dawn, already too late - broken glass, Amanda
screaming. Wet boot prints on the floor... seaweed.

I put her in harm's way. My fault. She fit the profile. Part of the reason I
got so goddamn obsessed. All those pics of those little girls... like seeing my
own child in danger, over & over.

Roscoe: I can't do this anymore. Going to send you all my data.
Maybe you can pickup where I left off. 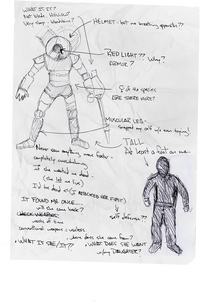 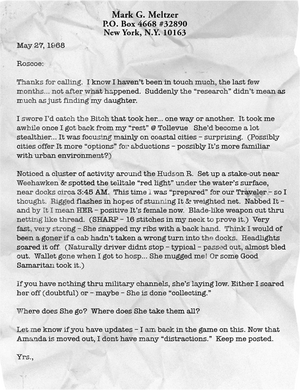 Thanks for calling. I know I haven't been in touch much, the last few
months... not after what happened. Suddenly the "research" didn't mean as
much as just finding my daughter.

I swore I'd catch the Bitch that took her... one way or another. It took me
awhile once I got back from my "rest" @ Tollevue. She'd become a lot
stealthier... It was focusing mainly on coastal cities - surprising. (Possibly
cities offer It more "options" for abductions - possibly It's more familiar
with urban environment?)

Noticed a cluster of activity around the Hudson R. Set up a stake-out near
Weehawken & spotted telltale "red light" under the water's surface,
near docks circa 3:45 AM. This time I was "prepared" for our Traveler - so I
thought. Rigged flashes in hopes of stunning It & weighted net. Nabbed It -
and by It I mean HER - positive It's female now. Blade-like weapon cut thru
netting like thread. (SHARP - 16 stitches in my neck to prove it.) Very
fast, very strong - She snapped my ribs with a back hand. Think I would have been a goner if a cab hadn't taken a wrong turn into the docks. Headlights
scared it off. (Naturally driver didn't stop - typical - passed out, almost bled
out. Wallet gone when I got to hosp... She mugged me! Or some Good
Samaritan took it.)

If you have nothing thru military channels, she's laying low. Either I scared
her off (doubtful) or - maybe - She is done "collecting".

Let me know if you have updates - I am back in the game on this. Now that
Amanda is moved out, I don't have many "distractions". Keep me posted. 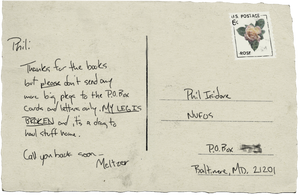 Thanks for the books

but please don't send any

Cards and letters only. MY LEG IS

BROKEN and its a drag to

Call you back soon - 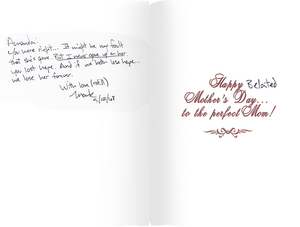 to the perfect Mom!

that she's gone. But I never gave up on her.

You lost hope. And if we both lose hope...

we lose her forever. 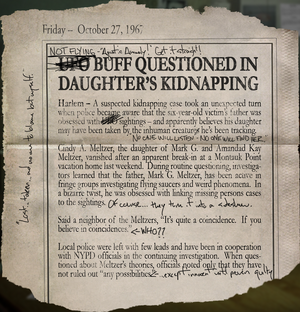 Harlem - A suspected kidnapping case took an unexpected turn
when police became aware that the six-year-old victim's father was
obsessed with UFO sightings - and apparently believes his daughter
may have been taken by the inhuman creatures he's tracking.

Cindy A. Meltzer, the daughter of Mark G. and Amandad Kay
Meltzer, vanished after an apparent break-in at a Montauk Point
vacation home last weekend. During routine questioning, investiga-
tors learned that the father, Mark G. Meltzer, has been active in
fringe groups investigating flying saucers and weird phenomena. In
a bizarre twist, he was obsessed with linking missing persons cases
to the sightings.        Of course... they turn it into a sideshow.

Said a neighbor of the Meltzers, "It's quite a coincidence. If you
believe in coincidences." <- WHO??

Local police were left with few leads and have been in cooperation
with NYPD officials in the continuing investigation. When ques-
tioned about Meltzer's theories, officials noted only that they have
not ruled out "any possibilities." <- except innocent until proven guilty

On top of the filing cabinet, next to the radio, is a prescription bottle of Cohydrone pills from K. Kucharski, MD.

Retrieved from "https://bioshock.fandom.com/wiki/Mark_Meltzer_Writings:_Days_1-6?oldid=288595"
Community content is available under CC-BY-SA unless otherwise noted.