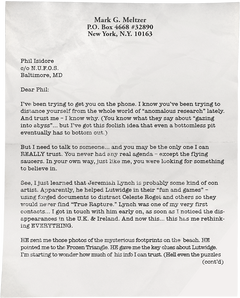 
I've been trying to get you on the phone. I know you've been trying to
distance yourself from the whole world of "anomalous research" lately.
And trust me - I know why. (You know what they say about "gazing
into abyss"...but I've got this foolish idea that even a bottomless pit
eventually has to bottom out.)

But I need to talk to someone...and you may be the only one I can
REALLY trust. You never had any real agenda - except the flying
saucers. In your own way, just like me, you were looking for something
to believe in.

See, I just learned that Jeremiah Lynch is probably some kind of con
artist. Apparently, he helped Lutwidge in their "fun and games" -
using forged documents to distract Celeste Roget and others so they
would never find "True Rapture." Lynch was one of my very first
contacts...I got in touch with him early on, as soon as I noticed the dis-
appearances in the U.K. & Ireland. And now this...this has me rethink-
ing EVERYTHING.

HE sent me those photos of the mysterious footprints on the beach. HE
pointed me to the Frozen Triangle. HE gave me the key clues about Lutwidge.
I'm starting to wonder how much of his info I can trust. (Hell even the puzzles 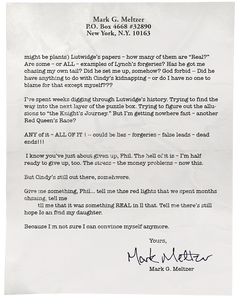 might be plants) Lutwidge's papers - how many of them are "Real?"
Are some - or ALL - examples of Lynch's forgeries? Has he got me
chasing my own tail? Did he set me up, somehow? God forbid - Did he
have anything to do with Cindy's kidnapping - or do I have no one to
blame for that except myself???

I've spent weeks digging through Lutwidge's history. Trying to find the
way into the next layer of the puzzle box. Trying to figure out the allu-
sions to "the Knight's Journey." But I'm getting nowhere fast - another
Red Queen's Race?

I know you've just about given up, Phil. The hell of it is - I'm half
ready to give up, too. The stress - the money problems - now this.

But Cindy's still out there, somehwere

Give me something, Phil...tell me thse

me that it was something REAL in ll that. Tell me there's still

Because I'm not sure I can convince myself anymore. 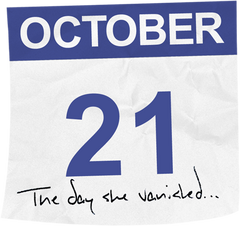 The day she vanished... 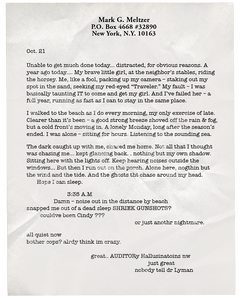 Unable to get much done today... distracted, for obvious reasons. A
year ago today.... My brave little girl, at the neighbor's stables, riding
the horsey. Me, like a fool, packing up my camera – staking out my
spot in the sand, seeking my red-eyed "Traveler." My falut

– I was
basically taunting IT to come and get my girl. And I've failed her – a
full year, running as fast as I can to stay in the same place.

I walked to the beach as I do every morning, my only exercise of late.
Clearer than it's been – a good strong breeze shoved off the rain & fog,
but a cold front's moving in. A lonely Monday, long after the season's
ended. I was alone – sitting for hours. Listening to the sounding sea.

The dark caught up with me, chased me home. Not all that I thought
was chasing me... kept glancing back. . nothing but my own shadow.
Sitting here with the lights off. Keep hearing noises outside the
windows... But then I run out on the porch. Alone here, nogthin

but
the wind and the tide. And the ghosts tht

chase around my head.

Hope I can sleep.

Damn – noise out in the distance by beach

snapped me out of a dead sleep SHRIEK GUNSHOTS?


or just another nightmare. 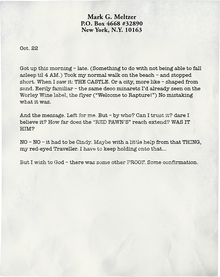 
Got up this morning - late. (Something to do with not being able to fall
asleep til 4 AM.) Took my normal walk on the beach - and stopped
short. When I saw it: THE CASTLE. Or a city, more like - shaped from
the sand. Eerily familiar - the same deco minarets I'd already seen on the
Worley Wine label, the flyer ("Welcome to Rapture!") No mistaking
what it was.

And the message. Left for me. But - by who? Can I trust it? dare I
believe it? How far does the "RED PAWN'S" reach extend? WAS IT
HIM?

NO - NO - it had to be Cindy. Maybe with a little help from that THING,
my red-eyed Traveller

. I have to keep holding onto that...

But I wish to God - there was some other PROOF. Some confirmation. 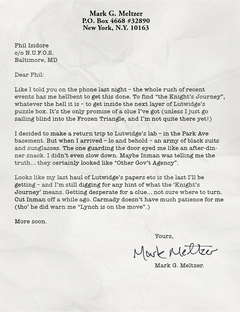 
Like I told you on the phone last night – the whole rush of recent
events has me hellbent to get this done. To find "the Knight's Journey",
whatever the hell it is – to get inside the next layer of Lutwidge's
puzzle box. It's the only promise of a clue I've got (unless I just go
sailing blind into the Frozen Triangle, and I'm not quite there yet!)

I decided to make a return trip to Lutwidge's lab – in the Park Ave
basement. But when I arrived – lo and behold – an army of black suits
and sunglasses. The one guarding the door eyed me like an after-din-
ner snack. I didn't even slow down. Maybe Inman was telling me the
truth… they certainly looked like "Other Gov't Agency".

Looks like my last haul of Lutwidge's papers etc. is the last I'll be
getting – and I'm still digging for any hint of what the 'Knight's
Journey' means. Getting desperate for a clue… not sure where to turn.
Cut Inman off a while ago. Carmady doesn't have much patience for me
(tho' he did warn me "Lynch is on the move".) 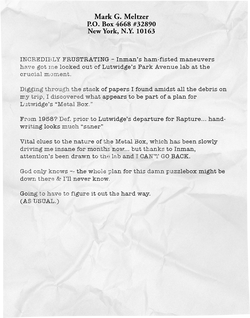 INCREDIBLY FRUSTRATING - Inman's ham-fisted maneuvers
have got me locked out of Lutwidge's Park Avenue lab at the
crucial moment.

Digging through the stack of papers I found amidst all the debris on
my trip, I discovered what appears to be part of a plan for
Lutwidge's "Metal Box."

From 1958? Def. prior to Lutwidge's departure for Rapture... hand-
writing looks much "saner"

Vital clues to the nature of the Metal Box, which has been slowly
driving me insane for months now... but thanks to Inman,
attention's been drawn to the lab and I CAN'T GO BACK.

God only knows -- the whole plan for this damn puzzlebox might be
down there & I'll never know.

Going to have to figure it out the hard way.
(AS USUAL.)

Retrieved from "https://bioshock.fandom.com/wiki/Mark_Meltzer_Writings:_Days_110-120?oldid=256238"
Community content is available under CC-BY-SA unless otherwise noted.