Journal, "Aboard the S.S. Nellie Bly"Edit 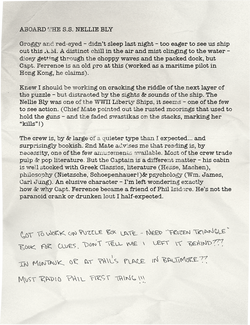 ABOARD THE S.S. NELLIE BLY

Groggy and red-eyed - didn't get much sleep last night - too eager to see us ship
out this A.M. A distinct chill in the air and mist clinging to the water -
dicey getting through the choppy waves and the packed dock, but
Capt. Ferrence is an old pro at this (worked as a maritime pilot in
Hong Kong, he claims).

Knew I should be working on cracking the riddle of the next layer of
the puzzle - but distracted by the sights & sounds of the ship. The
Nellie Bly was one of the WWII Liberty Ships,[1] it seems - one of the few
to see action. (Chief Mate pointed out the rusted moorings that used to
hold the guns - and the faded swastikas on the stacks, marking her
"kills"!)

The crew is, by & large a quieter type than I expected... and
surprisingly bookish. 2nd Mate advises me that reading is, by
necessity, one of the few amusements available. Most of the crew trade
pulp & pop literature. But the Captain is a different matter - his cabin
is well stocked with Greek Classics, literature (Hesse,[2] Machen[3]),
philosophy (Nietzsche,[4] Schoepenhauer![5])& psychology (Wm. James,[6]
Carl Jung[7]). An elusive character - I'm left wondering exactly
how & why Capt. Ferrence became a friend of Phil Isidore. He's not the
paranoid crank or drunken lout I half-expected.

GOT TO WORK ON PUZZLE BOX LATE - NEED "FROZEN TRIANGLE"

BOOK FOR CLUES. DON'T TELL ME I LEFT IT BEHIND???

IN MONTAUK OR AT PHIL'S PLACE IN BALTIMORE?? 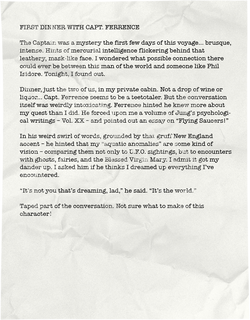 The Captain was a mystery the first few days of the voyage... brusque,
intense. Hints of mercurial intelligence flickering behind that
leathery, mask-like face. I wondered what possible connection there
could ever be between this man of the world and someone like Phil
Isidore. Tonight, I found out.

Dinner, just the two of us, in my private cabin. Not a drop of wine or
liquor... Capt. Ferrence seems to be a teetotaler. But the conversation
itself was weirdly intoxicating. Ferrence hinted he knew more about
my quest than I did. he forced upon me a volume of Jung's psychologi-
cal writing - Vol. XX - and pointed out an essay on "Flying Saucers!"[8]

In his weird swirl of words, grounded by that gruff New England
accent - he hinted that my "aquatic anomalies" are some kind of
vision - comparing them not only to U.F.O. sightings, but to encounters
with ghosts, fairies, and the Blessed Virgin Mary. I admit it got my
dander up. I asked him if he thinks I dreamed up everything I've
encountered.

Taped part of the conversation. Not sure what to make of this
character! 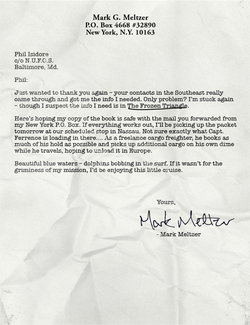 Just wanted to thank you again - your contacts in the Southeast really
came through and got me the info I needed. Only problem? I'm stuck again
- though I suspect the info I need is in The Frozen Triangle.

Here's hoping my copy of the book is safe with the mail you forwarded from
my New York P.O. Box. If everything works out, I'll be picking up the packet
tomorrow at our scheduled stop in Nassau. Not sure exactly what Capt.
Ferrence is loading in there.... As a freelance cargo freighter, he books as
much of his hold as possible and picks up additional cargo on his own dime
while he travels, hoping to unload it in Europe.

Beautiful blue waters - dolphins bobbing in the surf. If it wasn't for the
grimness of my mission, I'd be enjoying this little cruise.

Journal, "Off the Island of Andros"Edit 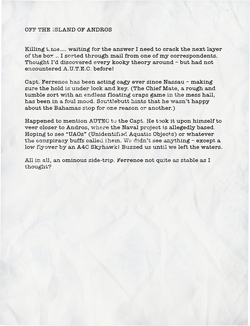 OFF THE ISLAND OF ANDROS

Killing time.... waiting for the answer I need to crack the next layer
of the box... I sorted through the mail from one of my correspondents.
Thought I'd discovered every kooky theory around - but had not
encountered A.U.T.E.C.[9] before!

Capt. Ferrence has been acting cagey since Nassau - making
sure the hold is under lock and key. (The Chief Mate, a rough and
tumble sort with an endless floating craps game in the mess hall,
has been in a foul mood. Scuttlebutt hints he wasn't happy
about the Bahamas stop for one reason or another.)

Happened to mention AUTEC to the Capt. He took it upon himself to
veer closer to Andros, where Naval project is allegedly based.
Hoping to see "UAOs" (Unidentified Aquatic Objects) or whatever
the conspiracy buffs called them. We didn't see anything - except a
low flyover by an A4C Skyhawk![10] Buzzed us until we left the waters.

All in all, an ominous side-trip. Ferrence not quite as stable as I
thought?

Retrieved from "https://bioshock.fandom.com/wiki/Mark_Meltzer_Writings:_Days_131-137?oldid=271797"
Community content is available under CC-BY-SA unless otherwise noted.