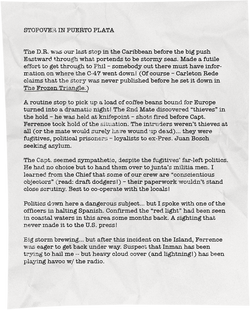 The D.R. was our last stop in the Caribbean before the big push
Eastward through what portends to be stormy seas. Made a futile
effort to get through to Phil - somebody out there must have infor-
mation on where the C-47 went down! (Of course - Carelton Rede
claims that the story was never published before he set it down in
The Frozen Triangle.)

A routine stop to pick up a load of coffee beans bound for Europe
turned into a dramatic night! The 2nd Mate discovered "thieves" in
the hold - he was held at knifepoint - shots fired before Capt.
Ferrence took hold of the situation. The intruders weren't thieves at
all (or the mate would surely have wound up dead)... they were
fugitives, political prisoners - loyalists to ex-Pres. Juan Bosch[2]
seeking asylum.

The Capt. seemed sympathetic, despite the fugitives' far-left politics.
He had no choice but to hand them over to junta's[3] militia men. I
learned from the Chief that some of our crew are "conscientious
objectors" (read: draft dodgers![4]) - their paperwork wouldn't stand
close scrutiny. Best to co-operate with the locals!

Politics down here a dangerous subject... but I spoke with one of the
officers in halting Spanish. Confirmed the "red light" had been seen
in coastal waters in this area some months back. A sighting that
never made it to the U.S. press!

Big storm brewing... but after this incident on the Island, Ferrence
was eager to get back under way. Suspect that Inman has been
trying to hail me—but heavy cloud cover (and lightning!) has been
playing havoc w/ the radio. 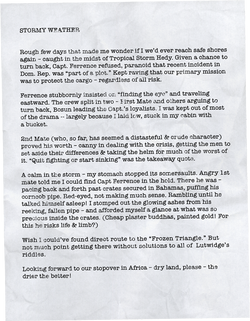 Rough few days that made me wonder if I we'd ever reach safe shores
again - caught in the midst of Tropical Storm Hedy. Given a chance to
turn back, Capt. Ferrence refused, paranoid that recent incident in
Dom. Rep. was "part of a plot." Kept raving that our primary mission
was to protect the cargo - regardless of all risk.

Ferrence stubbornly insisted on "finding the eye" and traveling
eastward. The crew split in two - First Mate and others arguing to
turn back, Bosun leading the Capt.'s loyalists. I was kept out of most
of the drama—largely because I laid low, stuck in my cabin with
a bucket.

2nd Mate (who, so far, has seemed a distasteful & crude character)
proved his worth - canny in dealing with the crisis, getting the men to
set aside their differences & taking the helm for much of the worst of
it. "Quit fighting or start sinking" was the takeaway quote.

A calm in the storm - my stomach stopped its somersaults. Angry 1st
mate told me I could find Capt. Ferrence in the hold. There he was -
pacing back and forth past crates secured in Bahamas, puffing his
corncob pipe. Red-eyed, not making much sense. Rambling until he
talked himself to sleep! I stomped out the glowing ashes from his
reeking, fallen pipe - and afforded myself at a glance at what was so
precious inside the crates. (Cheap plaster buddhas, painted gold! For
this he risks life and limb?)

Wish I could've found direct route to the "Frozen Triangle." But
not much point getting there without solutions to all of Lutwidge's
riddles.

Looking forward to our stopover in Africa - dry land, please - the
drier the better! 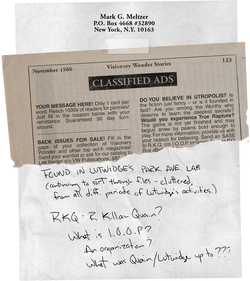 from all diff. periods of Lutwidge's activities.)

What is I.O.O.P.?
An organization?
What was Quain/Lutwidge up to???

Retrieved from "https://bioshock.fandom.com/wiki/Mark_Meltzer_Writings:_Days_138-144?oldid=256235"
Community content is available under CC-BY-SA unless otherwise noted.