Journal, "Stop Over in Tangiers"Edit 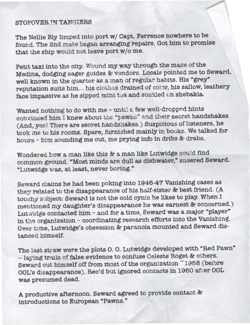 The Nellie Bly limped into port w/Capt. Ferrence nowhere to be
found. The 2nd mate began arranging repairs. Got him to promise
that the ship would not leave port w/o me.

Petit taxi into the city. Wound my way through the maze of the
Medina,[2] dodging eager guides & vendors. Locals pointed me to Seward,
well known in the quarter as a man of regular habits. His "grey"
reputation suits him... His clothes drained of color, his sallow, leathery
face impassive as he sipped mint tea and suckled on shebakia.[3]

Wanted nothing to do with me - until a few well-dropped hints
convinced him I knew about the "Pawns" and their secret handshakes.
(And,yes! there are secret handshakes.) Suspicious of listeners, he
took me to his rooms. Spare, furnished mainly in books. We talked for
hours - him sounding me out, me prying info in dribs & drabs.

Wondered how a man like this & a man like Lutwidge could find
common ground. "Most minds are dull as dishwater," sneered Seward.
"Lutwidge was, at least, never boring."

Seward claims he had been poking into 1946-47 vanishing cases as
they related to the disappearance of his half-sister & best friend.(A
touchy subject: Seward is not the cold cynic he likes to play. When I
mentioned my daughter's disappearance he was earnest & concerned.)
Lutwidge contacted him - and for a time, Seward was a major "Player"
in the organization -Coordinating research efforts into the Vanishing.
Over time, Lutwidge's obsession & paranoia mounted and Seward dis-
tanced himself.

The last straw were the plots O.O.Lutwidge developed with "Red Pawn"
-- laying trails of false evidence to confuse Celeste Roget & others.
Seward cut himself off from most of the organization ~1958 (before
OOL's disappearance). Rec'd, but ignored contacts in 1960 after OOL
was presumed dead. 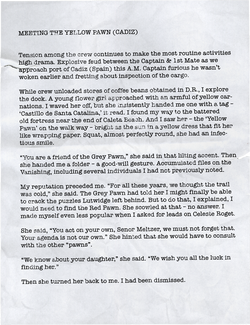 Tension among the crew continues to make the most routine activities
high drama. Explosive feud between Captain & 1st Mate as we
approach port of Cadiz (Spain) this A.M. Captain furious he wasn't
woken earlier and fretting about inspection of cargo.

While crew unloaded stores of coffee beans obtained in D.R.,I explore
the dock. A young flower girl approached with an armful of yellow car-
nations. I waved her off, but she insistently handed me one with a tag -
'Castillo de Santa Catalina,[5]' it read. I found my way to the battered
old fortress near the end of Caleta Beach.[6] And I saw her - the 'Yellow
Pawn' on the walkway - bright as the sun in a yellow dress that fit her
like wrapping paper. Squat, almost perfectly round, she had an infec-
tious smile.

"You are a friend of the Grey Pawn," she said in that lilting accent.
Then she handed me a folder - a good-will gesture. Accumulated files on the
vanishing, including several individuals I had not previously noted.

My reputation preceded me. "For all these years, we thought the trail
was cold," She said. The Grey Pawn had told her I might finally be able
to crack the puzzles Lutwidge left behind. But to do that, I explained, I
would need to find the Red Pawn. She scowled at that - no answer. I
made myself even less popular when I asked for leads on Celeste Roget.

She said, "You act on your own, Senor Meltzer, we must not forget that.
Your agenda is not our own. "She hinted that she would have to consult
with the other "pawns".

"We know about your daughter," she said. "We wish you all the luck in
finding her."

Then she turned her back to me. I had been dismissed.

Retrieved from "https://bioshock.fandom.com/wiki/Mark_Meltzer_Writings:_Days_145-150?oldid=256234"
Community content is available under CC-BY-SA unless otherwise noted.