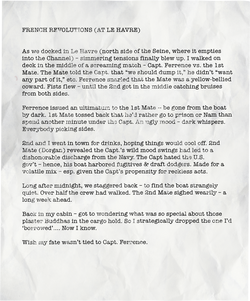 As we docked in Le Havre (north side of the Seine, where it empties
into the channel) - simmering tensions finally blew up. I walked on
deck in the middle of a screaming match - Capt. Ferrence vs. the 1st
Mate. The Mate told the Capt. that "we should dump it," he didn't "want
any part of it," etc. Ferrence snarled that the Mate was a yellow-bellied
coward. Fists flew - until the 2nd Mate got in the middle catching bruises
from both sides.

Ferrence issued an ultimatum to the 1st Mate—be gone from the boat
by dark. 1st Mate tossed back that he'd rather go to prison or Nam[2] than
spend another minute under the Capt. An ugly mood - dark whispers.
Everybody picking sides.

2nd and I went in town for drinks, hoping things would cool off. 2nd
Mate (Dorgan) revealed that the Capt.'s wild mood swings had led to a
dishonorable discharge from the Navy. The Capt hated the U.S.
gov't - hence, his boat harbored fugitives & draft dodgers. Made for a
volatile mix - esp. given the Capt.'s propensity for reckless acts.

Long after midnight, we staggered back - to find the boat strangely
quiet. Over half the crew had walked. The 2nd Mate sighed wearily - a
long week ahead.

Back in my cabin - got to wondering what was so special about those
plaster Buddhas in the cargo hold. So I strategically dropped the one I'd
'borrowed'.... Now I know. 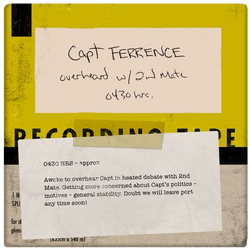 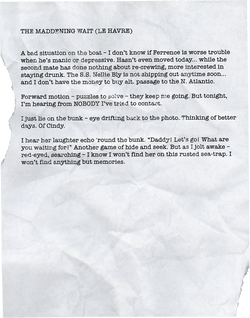 A bad situation on the boat - I don't know if Ferrence is worse trouble
when he's manic or depressive. Hasn't even moved today...while the
second mate has done nothing about re-crewing, more interested in
staying drunk. The S.S. Nellie Bly is not shipping out anytime soon...
And I don't have the money to buy alt. passage to the N. Atlantic.

Forward motion - puzzles to solve - they keep me going. But tonight,
I'm hearing from NOBODY I've tried to contact.

I lust lie on the bunk - eye drifting back to the photo. Thinking of better
days. Of Cindy.

I hear her laughter echo 'round the bunk. "Daddy! Let's Go! What are
you waiting for!" Another game of hide and seek. But as I jolt awake -
Red-eyed, searching - I know I won't find her on this rusted sea-trap. I
won't find anything but memories. 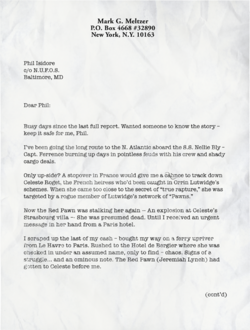 Busy days since the last full report. Wanted someone to know the full story -
keep it safe for me, Phil.

I've been going the long route to the N. Atlantic aboard the S.S. Nellie Bly -
Capt. Ferrence burning up days in pointless feuds with his crew and shady
cargo deals.

Only up-side? A stopover in France would give me a cahnce to track down
Celeste Roget, the French heiress who'd been caught in Orrin Lutwidge's
schemes. When she came too close to the secret of "true rapture," she was
targeted by a rogue member of Lutwidge's network of The "Pawns."

Now the Red Pawn was stalking her again—An explosion at Celeste's
Strasburg[3] villa—She was presumed dead. Until I received an urgent
message in her hand from a Paris hotel.

I scraped up the last of my cash - bought my way on a ferry upriver
from Le Havre to Paris. Rushed to the Hotel de Bergier where she was
checked in under an assumed name, only to find - chaos. Signs of a
struggle...and an ominous note. The Red Pawn (Jeremiah Lynch) had
gotten to Celeste Roget before me. 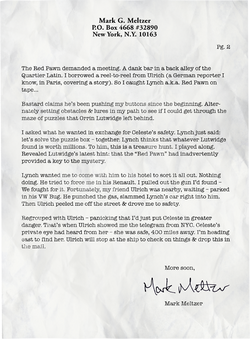 The Red Pawn demanded a meeting, a dank bar in the back ally of the
Quarter Latin.[4] I borrowed a reel-to-reel from Ulrich (a German reporter I
know, in Paris, covering a story). So I caught Lynch a.k.a. Red Pawn on
tape...

Bastard claims he's been pushing my buttons since the beginning. Alter-
nately setting obstacles and lures in my path to see if I could get through the
maze of puzzles that Orrin Lutwidge left behind.

I asked what he wanted in exchange for Celeste's safety. Lynch just said:
let's solve the puzzle box - together. Lynch thinks that whatever Lutwidge
found is worth millions. To him, this is a treasure hunt. I played along.
Revealed Lutwidge's latest hint: that the "Red Pawn" had inadvertently
provided a key to the mystery.

Lynch wanted me to come to his hotel to sort it all out. Nothing
doing. He tried to force me in his Renault.[5] I pulled out the gun I'd found -
We fought for it. Fortunately, my friend Ulrich was nearby, waiting - parked
in his VW Bug.[6] He punched the gas, slammed Lynch's car right into him.
Then Ulrich peeled me off the street and drove me to safety.

Regrouped with Ulrich - panicking that I'd just put Celeste in greater
danger. That's when Ulrich showed me the telegram from NYC. Celeste's
private eye had heard from her - she was safe, 400 miles away. I'm heading
east to find her. Ulrich will stop at the ship to check on things and drop this in
the mail. 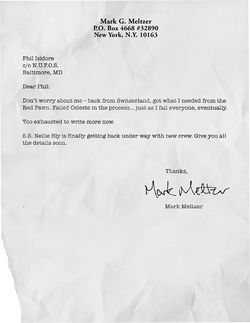 Don't worry about me - back from Switzerland, got what I needed from the
Red Pawn. Failed Celeste in the process... just like I fail everyone, eventually.

Too tired to write more now.

SS Nellie Bly is finally getting back underway with a new crew. Give you all
the details soon.

Retrieved from "https://bioshock.fandom.com/wiki/Mark_Meltzer_Writings:_Days_151-155?oldid=271798"
Community content is available under CC-BY-SA unless otherwise noted.