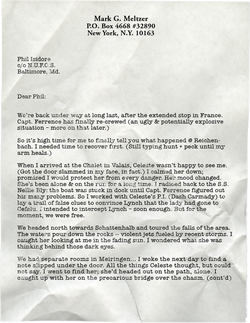 
We're back under way at long last, after the extended stop in France.
Capt. Ferrence has finally re-crewed (an ugly & potentially explosive
situation - more on that later.)

So it's high time for me to finally tell you what happened @ Reichen-
bach.[1] I needed time to recover first. (Still typing hunt + peck until my
arm heals.)

When I arrived at the Chalet in Valais,[2] Celeste wasn't happy to see me.
(Got the door slammed in my face, in fact.) I calmed her down;
promised I would protect her from every danger. Her mood changed.
She's been alone & one the run for a long time. I radioed back to the S.S.
Nellie Bly: the boat was stuck in deck until Capt. Ferrence figured out
his many problems. So I worked with Celeste's P.I. (Dash Carmady) to
lay a trail of false clues to convince Lynch that the lady had gone to
Cefalu.[3] I intended to intercept Lynch - soon enough. But for the
moment, we were free.

We headed north towards Schattenhalb[4] and toured the falls of the area.
The waters pour down the rock -- violent jets fueled by recent storms. I
caught her looking at me in the fading sun. I wondered what she was
thinking behind those dark eyes.

We had separate rooms in Meiringen[5].... I woke the next day to find a
note slipped under the door. All the things Celeste thought, but could
not say. I went to find her; she'd headed out on the path, alone. I
caught up with her on the precarious bridge over the chasm. (cont'd) 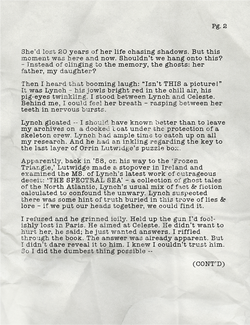 She'd lost 20 years of her life chasing shadows. But this
moment was here and now. Shouldn't we hang onto this?
- Instead of clinging to the memory, the ghosts: her
father, my daughter?

Then I heard that booming laugh: "Isn't THIS a picture!"
It was Lynch - His jowls bright red in the chill air, his
pig-eyes twinkling. I stood between Lynch and Celeste.
Behind me, I could feel her breath - rasping between her
teeth in nervous bursts.

Lynch gloated -- I should have known better than to leave
my archives on a docked boat under the protection of a
skeleton crew. Lynch had ample time to catch up on all
my research. And he had an inkling regarding the key to
the last layer of Orrin Lutwidge's puzzle box.

Apparently, back in '58, on his way to the 'Frozen
Triangle,' Lutwidge made a stopover in Ireland and
exclaimed the MS. of Lynch's latest work of outrageous
deceit: 'THE SPECTRAL SEA' - A collection of ghost tales
of the North Atlantic, Lynch's usual mix of fact & fiction
calculated to confound the unwary. Lynch suspected
there was some hint of truth buried in this trove of lies &
lore - if we put our heads together, we could find it.

I refused and he grinned icily. Held up the gun I'd fool-
ishly lost in Paris. He aimed at Celeste. He didn't want to
hurt her, he said; he just wanted answers. I riffled
through the book. The answer was already apparent. But
I didn't dare reveal it to him. I knew I couldn't trust him.
So I did the dumbest thing possible --

I charged straight at Lynch - trying to use his own massive book as a
shield. He fired. The bullet blasted through the pages. Blood flew - but I
still had momentum. I smashed into him. Gun went skittering across the
bridge. And Celeste grabbed it-

We lay there, me and Lynch. My shoulder pouring blood. Him pinioned
under me, howling in fury. And her wavering - the gun pointing first at
him, then at me - as if she didn't know which to shoot. She closed her eyes
- pulled the trigger - an echo rang off the rocks -- Lynch shrieked -- then
she dropped the gun like something poisonous... and ran. I stumbled to my
feet - hurried after her. Glanced back to see Lynch, flailing - blood pooling
out under his legs. I couldn't tell how badly he was hurt - didn't care.
All that mattered was her.

I slipped and slid down the muddy path. Looked for any trace of her - but
she was gone, long gone.

I doubled back to the bridge. There was nothing left of Lynch but a smear
of blood - red bootprints washing away as the rains returned.

There was nothing left for me to do but head back -- I was able to patch
myself up and slip away before the locals brought in the gendarmes. Didn't
find Celeste - didn't try. So much for my promise to protect her - I put her
right in the Red Pawn's path.

Posting this from the UK today - More later.

Arrival in port was a risky business - thanks to the incompetence
our new rookie "crew". A motley young gang - mostly French, a couple
of Germans and a hot-blooded Italian who acts as ring-leader. These
long-hairs pass around Mao's little Red Book[6] and something called "La
Société du spectacle."[7] They're not interested in running the ship - too
busy endlessly checking, re-checking & reloading handguns liberated
from the hold. (Capt. Ferrence remains a true believer, but it's clear
he's having second thoughts about helping these hoodlums escape
whatever justice they dodged in Europe.)

A very brief stop in London. Thanks to Lee Wilson Seward, I was
able to meet another IOOP member, the "Glass Pawn". Turns out, I
knew him by his works... nonsense like 'ANIMAL E.S.P'. and the just-
barely helpful 'FROZEN TRIANGLE'.

Carleton Rede turned out to be surprisingly down-to-earth. Too
down-to-earth in fact - he cheerfully admitted that his membership in
OOL's "Pawns" was a lark,an opportunity to gather info for his
(admittedly) flakey books. Peculiar attitude towards research: says he
only relates the stories he's told, and he refuses to make judgement
calls between truth & lies, fact & fiction.

Apparently one of his major sources of data was a fellow Pawn -
one Mr. Jeremiah Lynch, the Red Pawn himself! Now I'm left wonder-
ing, once again, what data I can trust. Got back on board with two
prizes: advance copy of Carleton's latest book (hopefully useful?); and
an American paper with an alarming headline. Is OOL on the run?
What is the Red Pawn up to?

Retrieved from "https://bioshock.fandom.com/wiki/Mark_Meltzer_Writings:_Days_156-164?oldid=256232"
Community content is available under CC-BY-SA unless otherwise noted.