watch 03:19
Wiki Targeted (Games)
Do you like this video?
Play Sound

Brief stopover in Reykjavik - at my insistence. Capt. Ferrence is
eager to complete our deal & drop me at my destination - his crew is
even more eager to be rid of me. But I had to take my chance meeting
the man who helped Lutwidge reach his "Wonderland."

The Ivory Pawn was a grim old sailor - face scarred with age, he
regarded me with an impassive squint as he tottered down the planks.
He held a sign of recognition - a chesspiece carved from whalebone. I
followed him to an old fisherman's shack, barely warmed by a black
iron stove. He toasted me with a beer chilled in a crab cage. Then he
told me what he knew.

Lutwidge arrive in 1958 towards the end of the first conflicts in
Iceland's "Cod War"[1] with England - a battle over fishing rights.
Lutwidge had latched onto the story of an English trawler that had
gotten into a stand-off with an Icelandic naval vessel. Fortunately for
the English fishermen, the HMS Russell rolled in to save the day while
the trawler fled into international waters. Rumor had it that it lost its
bearings, radioing back a story of an alarming encounter with a light-
house miles from any land! The trawler got lucky again - it nearly
capsized as it reversed course but it limped back home - the tale of its
ghostly encounter forgotten in the shadow of its more historic role.

Apparently this story gave Lutwidge the final key to the location
of Rapture.

Ivory Pawn provided me with a tape - an intercept recorded that
fateful night by the Icelandic Coast Guard.

Combined with Capt. Ferrence's encyclopedic knowledge of military
history - the tape also gave me the final clues to reveal the next - and
last - layer of OOL's puzzle box.

But I remain more confused than ever. Five steps to Rapture??? What
do they signify?

Following the guidance of Lutwidge's chart - insane though it
seems. We briefly landed on SURTSEY[2] - the desolate volcanic isle that
roiled up from the deeps a scant few years ago. An impressive collec-
tion of debris washed up here - including a few items I've seen before.
A good sign that we are close to Rapture?

Troubling to be amongst the remnant of broken ships, lost travel-
ers. how many of them met their fate because they came too close to
precisely what we are chasing? Noted a few broken religious artifacts
amongst the debris. Mentioned it to Capt. Ferrence when I showed him
some photos of the wreckage.

Ferrence admitted to me that this was not the first time he'd
smuggled contraband. In fact, one of his earliest runs - he was
aboard a ship that was moving through these waters with a hold full
of various religious artifacts. Ferrence assumed they were holding
contraband (that's what gave him the idea to use the plaster
Buddhas for the guns). he never knew precisely where the cargo of
artifacts were bound - he got his ass dumped in Reykjavik for asking
too many questions.

The crew is becoming increasingly impatient. They're eager to
reach safe haven in Holland - but Ferrence has insisted on completing
our contract. Despite his many failings - Casey Ferrence is, if nothing
else, a man of his word. he has sworn to get me to my destination -
even if I insist on following Lutwidge's strange five point circling path
to reach, at last, the mystery at the center.

I try to sleep and dream of Cindy. Awake to a vision of her - glowing
in the blinking ruby light of the Box. Voices outside the hatch -
Ferrence arguing with the new crewmen. Managed to catch some of it
on tape.

Reviewing audio files when I heard commotion on deck.
Instinctually punched the record button as I ran up to
see. The Italian was shouting to the other crewmen - claims
he'd seen something on the port side - a boat, glowing eyes
staring at him. And giggles - LIKE LITTLE GIRLS. By the
time anyone else reached him, there was nothing but an
abandoned dinghy. Lost it in the searchlight - but Ferrence
is reversing course to intercept 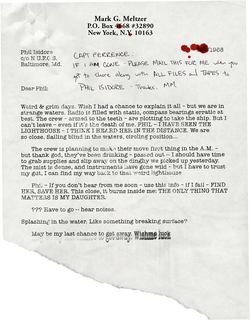 
Weird & grim days. Wish I had a chance to explain it all - but we are in
strange waters. Radio is filled with static, compass bearings erratic at
best. The crew - armed to the teeth - are plotting to take the ship. But I
can't leave - even if it's the death of me. PHIL - I HAVE SEEN THE
LIGHTHOUSE - I THINK I HEARD HER IN THE DISTANCE. We are
so close. Sailing blind in the waters, circling position...

The crew is planning to make their move first thing in the A.M. -
but thank god, they've been drinking - passed out -- I should have time
to grab supplies and slip away on the dinghy we picked up yesterday.
The mist is dense, and instruments have gone wild - but I have to trust
my gut, I can find my way back to that weird lighthouse

Phil - If you don't hear from me soon - use this info - if I fail - FIND
HER, SAVE HER. This close, it burns inside me: THE ONLY THING THAT
MATTERS IS MY DAUGHTER.

Splashing in the water. Like something breaking the surface?

May be my last chance to get away. Wishme luck

Retrieved from "https://bioshock.fandom.com/wiki/Mark_Meltzer_Writings:_Days_165-172?oldid=256230"
Community content is available under CC-BY-SA unless otherwise noted.