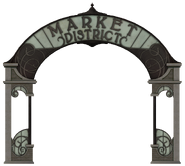 The Market District is one of the sub-sections of Downtown Emporia connecting the Financial District with the Memorial Gardens and Victory Square. Originally an upper-class commercial district, it housed many fine shops and boutiques.

The Market District was where the wealthy citizens of Columbia could do their shopping. With various companies selling groceries, wine, clothes, sweets, fruit, vegetables, fine china, and even art material, the area truly had most of a person's essentials. The district also housed the Lutece Labs, Rosalind and Robert Lutece's laboratory and home, and Magical Melodies, the popular Columbian artist Albert Fink's studio.

On July the 27th, 1907, Rosalind Lutece had one of her theories regarding Elizabeth and the Tears confirmed here: Upon returning home from a dinner, Rosalind saw a Tear in the Market District, showing another version of Columbia, under a Communist rule. This proved that locking Elizabeth up in the tower on Monument Island didn't stop Tears from appearing around the city.[1]

The southern part of the market is entered from the Financial District after the main gate has been unlocked by Elizabeth. When Booker DeWitt and Elizabeth enter, they arrive at a glass-ceiling covered promenade, where a Fireman will assault them. The two businesses set here (Hudson's Fine Clothing and Parker & Co. Excelsior Brand Canned Meats) are both on fire and a Vox member has written "The Founders Will Bleed!!" in red on the wall.

Further walking leads to a more open area, with several businesses. It contains several benches, trees, and bushes, along with an empty building dock. A poster set up by the Vox on the back of the Bank of the Prophet, looking over an angel statue, reading "The Vox Populi Reclaim This Place", accurately describes the area. Red pendants hang from most buildings and the area is left in a dismantled state. By the entrance to the Central Market, a dead man holding a Return to Sender lays next to a toppled Swiderek's Condensed Milk carriage.

Another branch of the clothing retailer is located here. It has been gutted and burned out as compared to its pristine counterpart in New Eden Square. Visiting here is required to find the Code Book to decode the Vox Cipher in the Bank of the Prophet. Passing by the store will also lead into a Fireman ambush.

Parker & Co. Excelsior Brand Canned Meats has been set ablaze, presumably by the Fireman, along with the neighboring Hudson's Fine Clothing. The entrance is locked and some outdoor seating contains a bottle of Salts.

This liquor store has been locked despite its destroyed back wall. A lockpick can be found outside to help pick the lock. Entering will yield a trove of Silver Eagles as well as an Infusion bottle in the window.

These two businesses are both locked and inaccessible. Patriot's Pride appears to be untouched, but Springfield has been through some conflict. The business' sign has been torn down and a company furnace has been left outside.

The business front is set opposite to the Central Market entrance and is set in a heavy blaze. The store is locked and much of the business' produce has been left outside in the fire.

When the player enters the central area, either from south or north, they will witness Vox Populi members executing rounded up upper-class citizen. The Vox is then alerted to the player's presence and will attack, along with their Motorized Patriot. The businesses are centered around a fountain, which is now completely dry. Most of the Market District's fruit and vegetable stands are housed here, all of which have been left to rot. Upon leaving this area, two additional Vox Soldiers will attack.

Initially, the lab and home of Rosalind and Robert Lutece is gated shut. However, Booker and Elizabeth learn at the Memorial Gardens that they must venture here to learn about one of the "truths" about Lady Comstock. They return to find the gates unbarred, but guarded by Vox Populi.

This small unnamed grocery is located by the fountain, inbetween the stairs to the North Market. The grocery was seemingly hastily abandoned as the uproar began. The entrance is wide open, with the shelves on each side of the store's counter untouched, while the produce by the windows has been raided, leaving some stock on the floor. Someone has emptied the cash register in a hassle, leaving his coat and scattered coins on the counter and floor, along with a Lockpicking Kit containing two lockpicks. The storage contains canned food, a Pistol and Pistol Ammo.

Inside are several vending machines. Curiously the shopkeeper is still sweeping the floor despite the building being consumed by flames.

This branch of the business is set in a green building partly on fire, also terraced, opposite to Parker & Co. Excelsior Brand Canned Meats. A Freight Hooked balcony, containing a First Aid Kit, can be brought in to assist the player in combat. The building is locked but can be unlocked with three lockpicks. The interior has been ransacked by the Vox and is in poor condition, but they've left a few Silver Eagles, a Gear and several Gift Boxes untouched.

A small Harper's Grocery stand is set on the back of the unnamed grocery's building, which sold fresh fruit at one point. By the time Booker and Elizabeth pass the area, it has been emptied, leaving a pile of apples by the stand's base.

The area surrounding Harper's Grocery consists of abandoned fruit stands, a large amount of fruit and their containers left scattered everywhere, as well as a Dollar Bill vending machine. Red cloth left by the Vox Populi hang from most buildings and the few entrances to them are gated. The area also contains a map of Downtown Emporia and access to the balcony of the roof of Parker & Co. Excelsior Brand Canned Meats. By the balcony is a Freight Hook, which holds a Health Kit. When the player arrives here from the Central market, two Vox Soldiers will come running from the Northern Market.

The northern part of the market can be entered from the Victory Square and is in no better shape than the rest of the district, although free of enemies. The area housed Magical Melodies, from which an out-of-this-world tune can be heard. The street around Magical Melodies has partly collapsed, causing the building to float freely, providing a path for the player. A fine china shop and an art supply store also operated from here, both now destroyed. A Telescope and the "Solving the Irish Problem" Kinetoscope is found on the street that leads to the Memorial Gardens.

The studio of Albert Fink has seen better days. Situated across from the Memorial Gardens, the building is unstable and keeps bobbing in and out of street level.

These two unnamed separate businesses operated next to each other not far from the Victory Square entrance. Both have suffered major damage during the uprising.

The Kinetoscope "Solving the Irish Problem" is set by the Art Supply Store's entrance, from which the business's door is missing. The store front's windows are about the only thing intact in the facility. The windows of the back wall are destroyed and a large hole has appeared on the left wall, giving access to the Fine China Shop. The Cash Register on the check-out counter has been emptied and a machine gun sits nearby. Paint and paintbrushes still sit on the counters and easels are lined up against the right wall, along a Safe (requiring three lockpicks to open).

The Fine China Shop gives the impression that the building might crash upon the player, as the roof has missing boards and the back wall has two large cracks on both sides of a Lady Comstock painting. The Vox or an explosion has toppled several of the shelves containing the pottery, destroying anything inside them. However, most visible plates, tea sets and jugs are still intact. The cash register is empty, but behind the counter is a Cash Bag and a lockpick.

Citizens moments before being executed.

The interior of the Fine China Shop.

Retrieved from "https://bioshock.fandom.com/wiki/Market_District?oldid=312606"
Community content is available under CC-BY-SA unless otherwise noted.