“Even in a utopia, someone needs to clean up the mess”
― Booker DeWitt[src]

Market Street is the first area of the first level in BioShock Infinite's downloadable content, Burial at Sea - Episode 1. The place consists of a strip of shops, residential complexes, and various businesses, with the street over-looking other buildings in Rapture.

Before the Civil War, Market Street served as both a recreational and residential promenade. The area catered to the middle to upper-class citizens of Rapture as a center where they could dine and live in style. With its spectacular sea views and Streamline Moderne grandeur, Market Street truly showcased the best in Rapture's design.

Waking up in his office in Market Street, Booker DeWitt is asked by an enigmatic woman named Elizabeth to take on a case: find Sally, a girl who's gone missing. Booker asserts the child is dead, but when Elizabeth hints otherwise he follows her and takes the case.

Market Street is buzzing with activity as Rapture's populace prepares to ring in the New Year. Most joke and gossip about philosophy and politics, while other individuals discuss more contemporary issues like Andrew Ryan and the recent take down of Frank Fontaine, Big Daddies, Splicing, and the recently developed Radar Range. Through his interactions with various people, it's clear that Booker is a well-known, slightly infamous, man about town. As the duo walk past the Little Wonders Educational Facility, Elizabeth pauses and is taken aback by the public presence of the conditioned Little Sisters being taught signals and signs by their instructor. They proceed to take an elevator up to High Street, the more established retail district, to reach the Garden of the Muses where Elizabeth expects to find a man with information for their investigation. 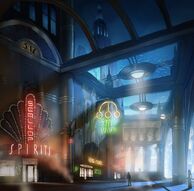 The model of the baby stroller.

A prelaunch version of the view from Market Street with a passing Bathysphere.

The earlier way to High Street.

Here Pneumo-Bots can be seen over head and a man uses a cane. 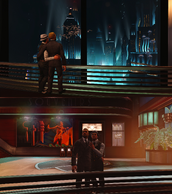 A whale of a view. 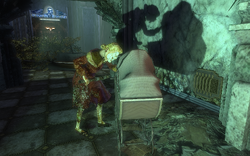