“If you can't come in from the cold, then you gotta grow ice over your heart. And the iceman cometh, Sander baby. The iceman fucking cometh.”
― Martin Finnegan[src]

Martin Finnegan is a potent Houdini Splicer held prisoner by Sander Cohen in the Frozen Tunnel to Poseidon Plaza in Rapture. He is one of four men Cohen assigns Jack to kill and photograph to complete his "masterpiece" in Fort Frolic.

When Finnegan met Cohen in Marseilles in 1937, he admired Cohen's paintings. Cohen, by comparison, claims to have simply "admired his… carriage." An artist in his own right, Finnegan quickly fell in with Cohen, even traveling with him to Rapture. In the underwater city, he held the much sought-after position of one of Cohen's disciples.

When Cohen closed Fort Frolic to the public, Finnegan was one of the many people who became trapped inside. While the other prisoners panicked and began fighting each other, Finnegan began scavenging any Plasmid and Gene Tonics he could find. Now spliced to the point of becoming "The Iceman," he took over the tunnel connecting the Atrium to Poseidon Plaza.[2] From there, he froze other Splicers in dramatic poses, and prepared for a fight against Cohen himself.

As Jack is sent on his mission, he must face off against Finnegan before he can enter the plaza. By the time he reaches the tunnel, it has been entirely frozen over. A threatening message addressed to Cohen can be found next to one of Finnegan's victims. Upon entering a small area connected to the tunnel, Jack is frozen by Finnegan, who already has a pose picked out for him. Luckily, Jack thaws, but now must pick Finnegan out in his room of frozen Splicers and kill him.

Head down the Frozen Tunnel, thawing the corpse from the ceiling and the Audio Diary from the wall as you go. As you enter the frozen tunnel, Finnegan freezes Jack temporarily and threatens to turn him into an ice sculpture. Shortly afterwards, Jack will thaw out, and the battle begins.

Finnegan starts the battle by posing as one of his ice sculptures. When the player approaches him, he will attack. Finnegan fights like a Houdini Splicer, except that he shoots ice blasts instead of fireballs. The Incinerate! Plasmid is a good weapon in this battle, but antipersonnel ammo also proves quite effective, as will a bolt from the Crossbow (If the player has managed to get some Incendiary Bolts before heading into the frozen tunnel, then those would work even better). In fact, a single head shot with the Crossbow (or Anti-Personnel Pistol Round) will finish him, even on Hard difficulty. The best strategy is to aim for his head while he is still posing, and one will not have to fight him at all. Another strategy involves grabbing the gas tank in the northwest corner of the freezer with Telekinesis and hurling it at Finnegan the moment he reveals himself.

Additionally, the player can thaw out the frozen Splicers in the room. They have a grudge against Finnegan, since he has kept them frozen for his own amusement, so they will instantly attack him upon thawing, though once Finnegan dies, the thawed Splicers turn their attention toward the player.

A quick and easy way to deal with Finnegan is to pick him out of the frozen Splicers and hit him in the chest with a bolt from the Crossbow, which should kill him instantly. Proximity Mines also work well.

After killing Finnegan, search his body for Frozen Field, and then take his photograph to be placed in Sander Cohen's Quadtych.

A recommendation is to take advantage of the controlled situation to maximize use of the Research Camera by dealing with all the other Splicers first.

The following are phrases that Martin Finnegan says in BioShock. The name of the source audio file is listed when known. 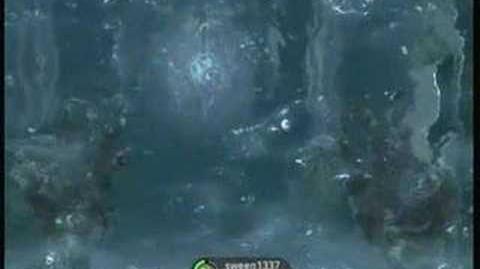 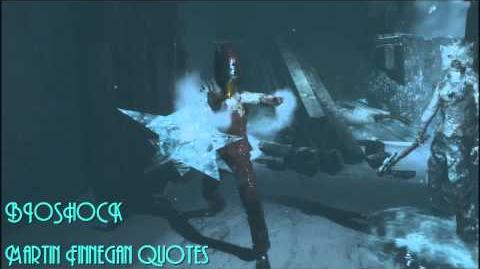