Mary Elizabeth Sarsfield was a five-year-old girl from the seaside town of Felixstowe in Suffolk, England. She was kidnapped by a Big Sister early in the morning of March 16, 1967.

There's Something in the SeaEdit

Mary Elizabeth lived in a seaside home in Felixstowe with her father, Ward Nayland Sarsfield, an accountant at the Stanton Shipping company. A Big Sister broke into their home at 2:30 AM in the morning of March 16 and captured Mary Elizabeth in her bedsheets, hefting her over one shoulder to carry away. Her father heard her screams, but he did not investigate immediately since he knew that his daughter was "prone to night terrors." By the time he went downstairs to check on her, the Big Sister was already escaping out of the window.

Like the kidnapping of Maura Clune, Ward Sarsfield's only clue about the identity of the kidnapper was the red light coming from the Big Sister's helmet. Local authorities mistakenly assumed that the kidnapper was a jewel thief who used precision glass-cutting tools, due to the way a window in the Sarsfield home was cut. They believed that Mary Elizabeth had only been taken by accident when the thief was alarmed by her screams during the search for valuables. Thus, they expected an eventual ransom demand. None of the local authorities connected the red light of the kidnapper with a sighting of red light underwater by a shipping vessel 50 miles off shore the previous night.

FELIXSTOWE - Last night, a local seaside home was in the site of what police describe as a
"cunning and highly professional" break-in, resulting in a young girl's abduction.

At about 2:30 AM, Stanton Shipping accountant Ward Nayland Sarsfield, 38, was woken
by a cry from his daugher Mary Elizabeth, age 5. The child was prone to "night terrors,"
so Sarsfield did not investigate immediately. As he headed downstairs, he noticed a
"red glow" as a lean figure rapidly exited with a bundle over one shoulder.

Red glow on land and water. WHAT IS IT?

The bundle was apparently Mary Elizabeth, wrapped inther own bed-sheets. Sarsfield says
the red light appeared to come from a lamp somehow attached to the kidnapper's head.

The kidnapper left little evidence expect a windowpane cut with extreme precicion. According to Sgt. Harris Beaumont,
the entry resembles the work of an experienced jewel thief usually specially designed glass-cutting tools. He suspects
that the thief may have been alarmed by the child's screem, cutting short a search for valuables.

NO. It come for the girls.

They won't get one! 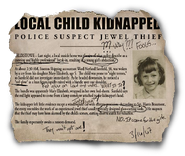 The article.
Add an image to this gallery
Retrieved from "https://bioshock.fandom.com/wiki/Mary_Elizabeth_Sarsfield?oldid=311590"
Community content is available under CC-BY-SA unless otherwise noted.